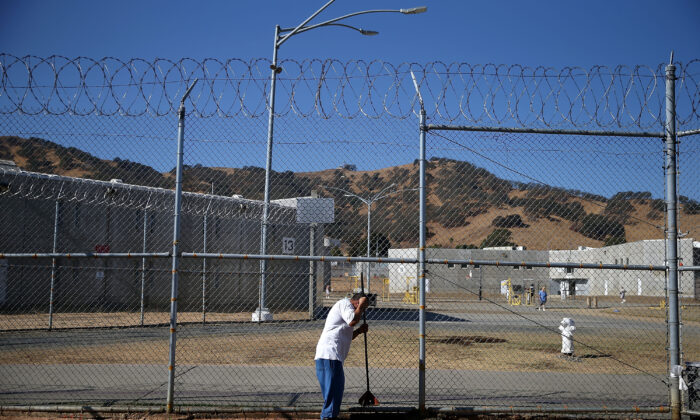 A California State Prison inmate works on the garden in the prison yard, in Vacaville, California, on October 19, 2015. (Justin Sullivan/Getty Images)
US News

Faced with a mounting roster of more than 3,200 exonerated Americans, some states, including Ohio, are taking steps to prevent the innocent from languishing behind bars.

Now, after more than two years of work, an Ohio Supreme Court-appointed task force is recommending that state lawmakers create an innocence inquiry commission, as part of  “a patchwork of improvements” needed to decrease the likelihood of wrongful convictions and to promptly vet claims of actual innocence—a process that can drag on for decades.

The recommendations were released on Aug. 15 in a report from the Task Force on Conviction Integrity and Postconviction Review. In 2020, Ohio Chief Justice Maureen O’Connor appointed the group of lawyers, judges, and other officials to study how the state handles claims of wrongful convictions and actual innocence.

Allegiance to the Truth Stressed

Modeled after a North Carolina agency, the proposed Ohio commission would “independently investigate the facts … guided by a commitment that neither the guilty should be exonerated nor the innocent remain convicted,” the task force report said.

Ideally, the commission’s “only allegiance” would be to the truth, the report said. The commission would supplement, not replace, existing mechanisms for challenging a criminal conviction.

Although the task force included input from Ohio Attorney General David Yost and people with past prosecutorial experience, “nearly all county prosecutors declined to participate,” the report says.

In fact, just two of Ohio’s 88 county prosecutors were directly involved; the rest declined O’Connor’s invitation. A state association of prosecutors issued a public statement shortly after the commission was formed, favoring some limited changes to procedural rules.

Ohio Public Defender Tim Young, a task force member, said an innocence commission and other changes are needed because current procedural rules and laws are blocking valid claims of innocence.

“We should never, ever stop a person from making a legitimate innocence claim,” Young said in an interview prior to the report’s release.

Across the nation, state and federal postconviction cases typically focus on whether legal procedures were followed, with little or no consideration for the possibility that the wrong person may have been convicted—or that no crime may have occurred, task force minutes say.

Another problem: Current processes tend to rely on court records while discounting or ignoring injustices that are “outside the record.”

Engel, in an interview this summer, cited the application of legal doctrines as another reason why unjust convictions may stand. For example, a claim of innocence can be struck down if a convicted person “knew about or could have discovered exonerating evidence,” he said.

“There are so many procedural hoops and hurdles that you have to ‘jump through’ just right; it reminds me of a dog running an agility course,” said Engel, who is a former prosecutor.

After reviewing a draft report from the task force advocating an innocence commission, Engel said such an entity “would serve a valuable role in Ohio.”

He especially welcomed its proposed ability to subpoena witnesses and documents. He said that most postconviction lawyers lack any “tool to compel the production of evidence.”

“In Ohio, there is no right to conduct discovery in post-conviction proceedings, except in limited instances in death-penalty cases,” he said.

Dean Gillispie, an Ohio man who spent two decades in prison for sexual assaults he didn’t commit, said he had no idea how arduous it is to prove a wrongful conviction until he went through the process himself.

In 2003, a dozen years after Gillispie was convicted, University of Cincinnati law students working with their professor, Ohio Innocence Project Director Mark Godsey, began fighting for his exoneration. Gillispie was released in 2011. Prosecutors lost their final appeal in 2017.

That earned Gillispie a spot on The National Registry of Exonerations, which several universities compile. Since 1989, 3,206 people had been unjustly convicted but were “later cleared of all the charges based on new evidence of innocence,” the registry said as of Aug. 15.

Collectively, the exonerees were incarcerated for 27,200 years—a breathtaking tally that only hints at the toll those lost years take, Gillispie said.

Last year, the registry added 169 exonerees. They lost an average of 11.5 years in prison—a fraction of the 47 years that Anthony Mazza of Massachusetts spent before he was absolved of murder, the registry’s longest-recorded incarceration.

Mazza and Gillispie were both victims of mistaken identification by eyewitnesses and official misconduct—two leading causes of wrongful convictions, according to the registry. In addition, Gillispie alleged that police failed to investigate an alternative suspect. A judge declared Gillispie “wrongfully imprisoned” last December, paving the way for him to sue the state.

“Why did it take 31 years?” Gillispie asked.

Reforms of postconviction processes are long-overdue, Gillispie said. He thinks such proposals might gain public support because of shifting attitudes. Many people who once dismissed allegations of wrongful convictions are now willing to consider that “maybe ‘the system’ got it wrong,” he said.

“Public opinion is starting to change. The number of people who are being exonerated is crazy—and people are noticing,” he said.

Judges also seem to be more aware of the potential for wrongful convictions. Many appear “open to vacating convictions that they or their predecessors would have allowed to stand in years past,” the registry says. That’s one possible reason why the annual number of exonerations has been climbing.

During the 1990s, the registry typically listed fewer than 50 exonerations annually. Each year since 2014, new cases have exceeded 150, with DNA evidence playing a role in fewer than 30 cases annually. Official misconduct, perjury, or false accusations consistently make up the lion’s share of the cases.

Among U.S. states, Illinois leads the way with 511 exonerations, many of which surfaced in clusters. Since 2016, 173 exonerations were added to Illinois’s list after Chicago police were caught planting drugs on people who had refused to pay bribes, the registry says.

Ohio lists 93 exonerations so far, although the total appears to exclude 43 convictions that were blamed on East Cleveland police misconduct, including falsifying search warrants, according to the registry.

This type of wrongdoing is often exposed by innocence-vetting entities such as Ohio’s proposed commission and by “conviction review” or “conviction integrity” units attached to prosecutors’ offices, the registry says. Similar entities exist in at least 16 states; they sometimes work in tandem with advocacy groups such as the nonprofit Innocence Project, which has affiliates in most U.S. states.

In 2020, the Ohio Prosecuting Attorneys Association acknowledged that “reports of wrongful convictions and police misconduct erode the public’s faith in the criminal justice system.” The group encouraged local prosecutors to establish internal units to review claims of innocence. But so far, officials said they know of only three such entities among Ohio’s 88 counties—and two of them were formed prior to the association’s release of “Conviction Review Best Practices” guidelines.

The proposed Ohio innocence commission seeks to fill that void. The task force wanted to address how to prevent wrongful convictions in the first place, but that topic was beyond the scope of its inquiry, records show. Acknowledging that its proposal could stir controversy, the task force gathered information from national experts and tried to weigh the interests of stakeholders, including defendants, prosecutors, lawmakers, judges, crime victims, defense lawyers, and the public.

Ohio state Rep. David Leland, former chair of the Ohio Democratic Party, served on the task force led by a Republican, Judge Gene Zmuda of Ohio’s 6th District Court of Appeals. It was unclear whether Leland planned to introduce legislation to create the innocence commission. His office didn’t respond to a request for comment.

The report lists 26 people who contributed to the task force’s work, including several other judges besides Zmuda; the Ohio Innocence Project’s Godsey; and a representative of the Buckeye State Sheriff’s Association, Van Wert County Sheriff Thomas Riggenbach.