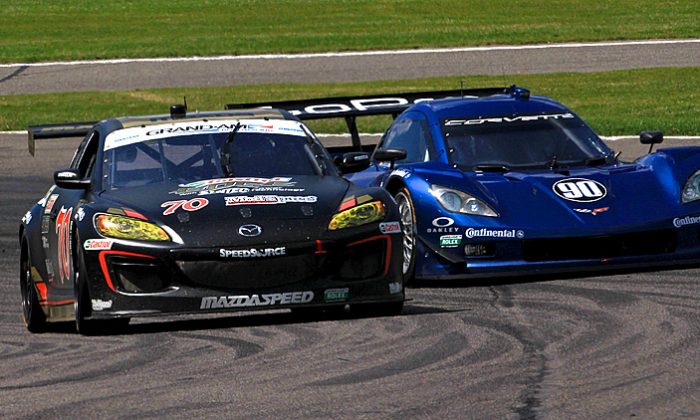 The Daytona Prototype field hasn’t changed since the Porsche 250 at Barber Motorsports Park in March, where Antonio Garcia and Richard Westbrook earned Spirit of Daytona its first DP win, and third place in the team championship. Garcia and Westbrook are tied for second in drivers’ points.

Starworks Motorsport will be back with two Riley-Fords including the series-leading #8 driven by Ryan Dalziel and Enzo Potolichio, who also lead the drivers’ standings.

Lucas Luhr and Alex Popow, third in the drivers’ standings, will drive the #2 Starworks machine.

Michael Shank Racing is bringing its Rolex 24-winning #60 Riley Ford, which sits second in the standings after two races. Oz Negri and John Pew, tied for second in drivers’ points, will be back behind the wheel.

The rest of the regulars: Telmex-Ganassi, SunTrust, Gainsco-Stallings will all be back to try to reclaim their places at the top of the pack. These once-dominant teams have had some hard luck so far this season, and will be eager to change that.

GT: Some New, Some Out

GT will lose one car overall for the Homestead-Miami round, but will gain two teams.

Oryx racing has decided not to enter because team owner and co-driver Humaid Al-Masaood has business in his native Saudi Arabia and won’t be back in time for the race. The team’s bright yellow Audi R8 Grand Am will be back for later rounds.

Rick Ware Racing and its Ford Mustang, co-driven by Jeff Earnhardt and Chris Cook, will also skip this round, and Team Sahlen will be bringing two rather than three Mazda RX-8s.

Extreme Speed Motorsports has entered its #03 Ferrari 458 Grand Am, piloted by ALMS regulars Ed Brown and Guy Cosmo. ESM contested the Rolex 24 but sat out Barber. ESM has two seasons of experience racing the Ferrari 458 in the American Le Mans Series; they have never raced at Miami-Homestead but that shouldn’t slow them down.

M2 Autosport, with brothers Julian and Sebastian Martinez, assisted by Mario Monroy, will race its SpeedSource-prepared #65 Mazda MX-8 at Miami. This Colombian team has competed in the Rolex series in select events for the past two years; this will be their Miami-Homestead debut.

Next: Full Weekend of Racing