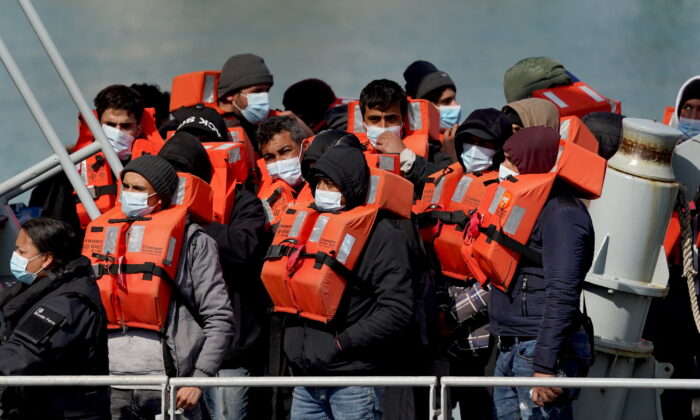 Following an apparent pause of 11 days, more than 250 people entered the UK illegally on Sunday by crossing the English Channel in small boats.

The UK’s Ministry of Defence confirmed that seven boats and 254 people were detected crossing the channel during the day.

The figure includes boats and people that landed in the UK and those intercepted at sea by British authorities and brought into the UK.

It doesn’t include people intercepted by French authorities while attempting to cross the Channel.

There is believed to have been an 11-day break in activity around the Channel from April 20 to 30, when no crossings were recorded amid reports of strong winds and choppy seas.

By Sunday, at least 6,947 people had reached the UK this year after navigating busy shipping lanes from France in small boats, according to data compiled by the PA news agency.

Typically there can be periods of several days or weeks without illegal immigrant crossings throughout the year, often depending on weather conditions.

The longest period without any crossings so far in 2022 was 16 days, between Jan. 27 and Feb. 11, PA analysis of government figures shows.

More people believed to be illegal immigrants were seen onboard a Border Force vessel on Monday morning.

On Thursday, the UK’s Nationality and Borders Bill became law, making it a criminal offence to knowingly enter the UK illegally, punishable by up to four years of imprisonment.

People smugglers facilitating illegal entries can face life imprisonment, and those who arrive illegally in the UK who could have claimed asylum in another safe country can be considered “inadmissible” to the UK asylum system.

The new law also includes powers to process asylum seekers overseas. On April 14, the government unveiled a new deal with Rwanda, which would see illegal immigrants relocated to the African nation for processing, in a bid to deter illegal entry into the UK.

A government spokesperson said: “The rise in dangerous Channel crossings is unacceptable. Not only are they an overt abuse of our immigration laws but they also impact on the UK taxpayer, risk lives, and our ability to help refugees come to the UK via safe and legal routes.”

Speaking on the campaign trail ahead of the local elections, Labour leader Sir Keir Starmer said, “Nobody wants to see anybody making that perilous journey across the Channel and everybody wants to crack down on the criminal gangs that are driving this,” adding, “The best way to do that is to have an international coordinated criminal response.”