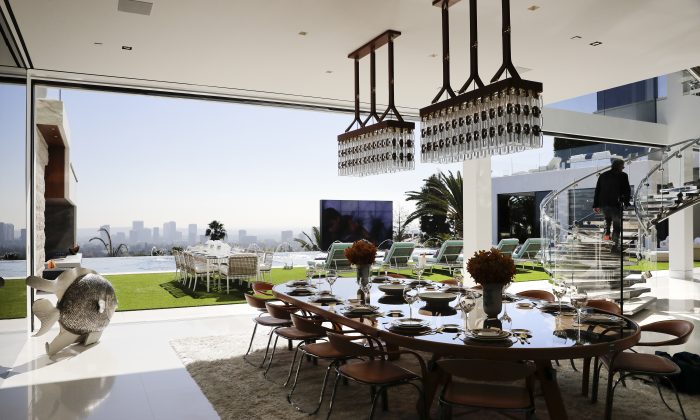 The indoor and outdoor dining areas at a $250 million mansion in the Bel-Air area of Los Angeles. (AP Photo/Jae C. Hong)
US

$250M Los Angeles Mega Mansion Is Most Expensive US Listing

LOS ANGELES—At $250 million, a new mega mansion in the exclusive Bel Air neighborhood of Los Angeles is the most expensive home listed in the United States.

According to Makowksy, only 3,000 people in the world could afford to buy it.

The Associated Press recently interviewed Makowksy inside the mansion. Here’s what he had to say about why he built it and who would spend $250 million on a house.

Q: Why did you build this house?

A: After being on major mega yachts across the world and on beautiful private aircraft, it didn’t make sense to me people were spending $350 million on a boat, $100 million on a plane, and they’re living in $20 million and $30 million homes. … The homes have not kept up with the toys. So my feeling is, if you’re going to spend over 12 hours a day in your home, it should be the most amazing experience in the world.

Q: What is it like being inside the house?

A: I would say it’s the eighth wonder of the world. I’ve had a couple people come in here and say it’s in the top seven—one of the other seven could go away. … Every single inch of this house is breathtaking. It’s a sensory overload. I’ve shown this house about 25 times now. People go in and use just about every adjective on half of the lower level. There’s no more adjectives. They just become numb. Every single thing in this house makes you feel like you’re in heaven.

Q: How did you reach $250 million for the listing price?

A: The reason it’s $250 million is because of all the work for the past four years of having 300 people inside here, the art curation inside the house. We have over $30 million worth of cars, exotic sports cars and vintage cars. … We have a 270-degree view from the snow-covered mountains all the way down to L.A. Seven full-time staff come with the house, which is crazy. So if you want the best chef in the world, you have her, and if you want a masseuse, we have you all hooked up. … We have water features that go completely around the house. We have stones from 50 different quarries from around the world, the most beautiful precious stones running through the house. … I truly believe the value is here.

Q: Why would someone spend so much money on a house, even with all these amenities?

A: It’s the kind of thing where I can’t sell it. Somebody has to fall in love with it and die over it. And when a person is sitting with $2 billion, $5 billion, or $20 billion in the bank and it’s just a number, do they really want to enjoy every second of their life—because this isn’t rehearsal, this is real life—or do they just want to look at a number in the bank?