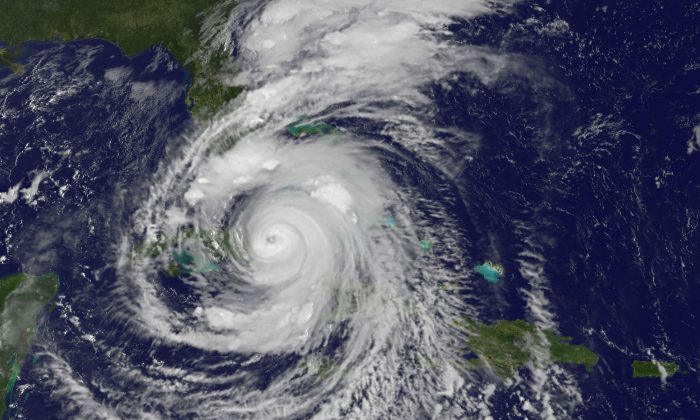 Power went out in more than 30,000 Florida homes on Saturday morning, as the outer bands of Hurricane Irma started to impact the state.

More than 30,000 Florida Power and Light (FPL) customers were without power as of 9 a.m. on Saturday, Sept. 10, according to the company’s website.

The affected customers are in the Miami-Dade and Broward counties. FPL has just over 2 million combined customers in these counties.

Millions have been ordered to evacuate Florida as time runs out. Hurricane Irma is forecast to arrive in Florida early on Sunday morning.

Hurricane Irma weakened slightly as of Saturday morning because it interacted with Cuba, but the storm is expected to strengthen again as it turns north and moves over the warm waters of the Gulf of Mexico.

Irma remained a major Category 4 storm on Saturday morning, according to an 8 a.m. advisory from the U.S. National Hurricane Center (NHC). Maximum sustained winds decreased to 130 miles per hour, but the hurricane is expected to remain powerful as it approaches Florida.

Water may rise up to 12 feet above sea level in parts of Florida, with the southwestern coastline from Captiva to Cape Sable forecast to fare the worst.

Hurricane Irma killed 21 people in the eastern Caribbean and left devastation in its wake.

Irma is one of the most powerful storms in a century, having broken a number of records as it traversed the Atlantic Ocean westward.

Florida is likely to experience unprecedented damage from Irma. The state has grown rapidly over the past two decades.

“We are running out of time. If you are in an evacuation zone, you need to go now. This is a catastrophic storm like our state has never seen,” Florida Gov. Rick Scott said.

President Donald Trump said in a videotaped statement that Irma was “a storm of absolutely historic destructive potential” and called on people to heed recommendations from government officials and law enforcement.