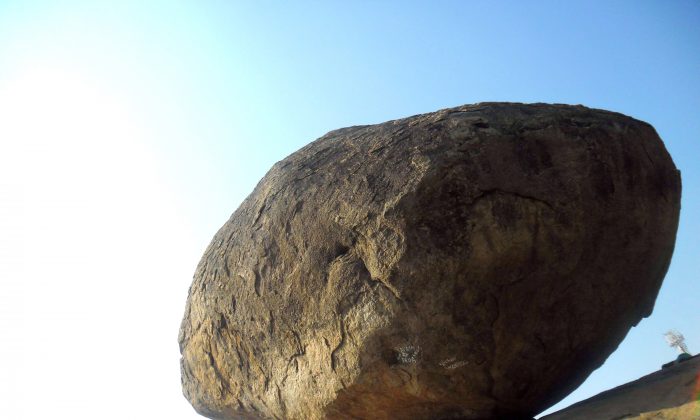 The Krishna Butter Ball is a large boulder located in Mahabalipuram, a town in the Kancheepuram district in the southern Indian state of Tamil Nadu.

A tourist attraction, this giant boulder balances on a small surface area on the slope of a hill. It has neither slid down this hill, nor budged when attempts were made to move it.

One of the earliest known attempts to move the boulder is said to have been made during the time of Narasimhavarman, a Pallava king who reigned during the 7th century A.D.

As the story goes, the king wanted to move the divine rock so that he could save it from the hands of sculptors. In spite of his good intentions, the boulder would not budge, and the king had to give up his plans.

Another known attempt to move the stone was made during the early 20th century. It is recorded that in 1908, the Governor of Madras, Arthur Lawley, intended to have the boulder removed from the hill. This was because he feared that it would roll down at any time, and destroy the town that stood at the base of the hill.

Seven elephants were used during the undertaking, though the rock did not budge even a little.

It is said that seven elephants were used during the undertaking, though the rock did not budge even a little. The governor’s fears have proven to be unfounded, as Krishna’s Butter Ball has not moved, let alone rolled down the hill. The town remains safe.

Krishna’s Butter Ball was originally known to the locals as Vaan Irai Kal. Translated from Tamil to English, it means “Stone of the Sky God.” It is said to have been the gods who placed this boulder in Mahabalipuram.

Krishna’s Butter Ball was originally known to the locals as Vaan Irai Kal, “Stone of the Sky God.”

The purpose was to show the power of the gods to the inhabitants of that town.

According to some sources, the “Stone of the Sky God” became known as “Krishna’s Butter Ball” as a result of a local tour guide’s “re-branding” of the boulder. According to Hindu mythology, the god Krishna, as a child, was fond of eating butter, and would often steal handfuls of that food from his mother’s butter jar.

As the giant boulder at Mahabalipuram looked like a dollop of butter that the god had dropped, it was  given the name Krishna’s Butter Ball. This name has stuck ever since.

Rajaraja Chola, who reigned between the late 10th and early 11th centuries A.D., was inspired by the boulder and created the Tanjavur Bommai, a traditional Indian roly poly toy made of terracotta. These toys remain popular today, as does Krishna’s Butter Ball, which continues to draw many tourists.