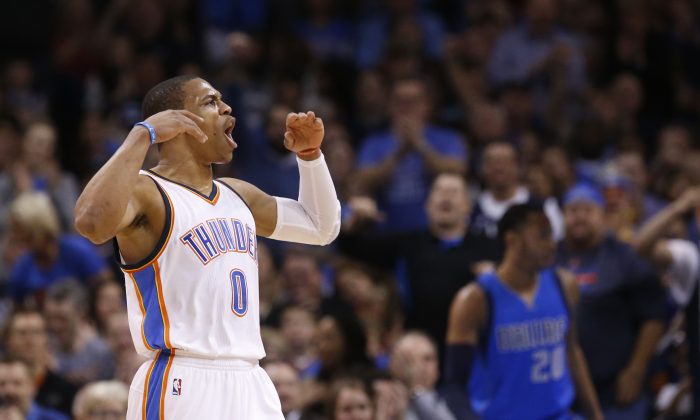 A combination of people involved in the NBA–25 executives, coaches or players–responded to a request to rank the top point guards in the NBA, and some aspects of the rankings are surprising.

First place in the rankings, compiled by ESPN, belongs to Russell Westbrook, who received the most first-place votes–13–and the most points, based on the survey questions, overall.

“He might be an alien. I’ve never seen anyone like him before. His athleticism and antics are off the charts,” said one league executive.

Stephen Curry–nine first-place votes–and Chris Paul–three–ended in second and third. An NBA executive said Curry is possibly “the best shooter we’ve ever seen off the dribble,” while another executive said that Paul brings “everything you could every want from a point guard.”

The middle tier, or the middle 10, includes some interesting players who could leap into the top tier at one point, such as Goran Dragic, Kemba Walker, and Ricky Rubio.

Perhaps the most interesting part of the 30-person rankings is that several backups made the list over starters. Jarrett Jack, D.J. Augustin, and Mo Williams made the rankings near the bottom.

The Lakers, Magic, 76ers, Bucks, and Knicks did not have a point guard on the list. Three teams there aren’t surprising, but two exclusions are–Elfrid Payton of Orlando, who recently posted several triple-doubles and is in the Rookie of the Year conversation; and Michael Carter-Williams, the Rookie of the Year last season who was recently traded to Milwaukee from Philadelphia.