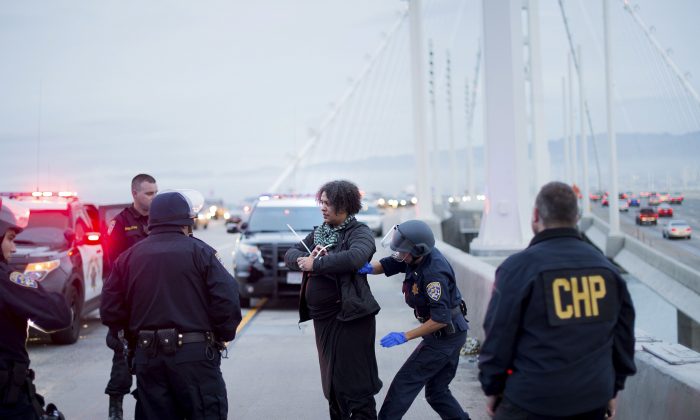 A California Highway Patrol officer detains a protester on the San Francisco-Oakland Bay Bridge, Monday, Jan. 18, 2016, in San Francisco. A group of protesters from the group Black Lives Matter caused the shutdown of one side of the bridge in a police-brutality protest tied to the Rev. Martin Luther King Jr. holiday. (AP Photo/Noah Berger)
US

At least 25 people were arrested following a demonstration that caused the shutdown of the San Francisco-Oakland Bay Bridge during the Martin Luther King Jr. holiday.

More than 1,000 protesters were involved in the protest, also shutting down several roads near the bridges.

They were demanding justice for the police shooting of Mario Woods in December.

Members of the protest group stopped vehicles on the westbound lanes at around 4 p.m. on Monday. They also chained themselves together to form a line across the bridge, with signs that say, “BLACK HEALTH MATTERS.”

California Highway Patrol officers pulled protesters from cars and pulled their cars out of the lanes. After that, traffic started to move again, ABC News reported.

The CHP said in all, 25 people were taken into custody.

CHP officers used bolt cutters to remove the protesters’ chains, SFGate reported. The protesters were then placed in zip-tie handcuffs and moved to the shoulder of the highway.

“There was no force used; everyone cooperated,” CHP officer Vu Williams said. “The fortunate thing was today was a public holiday, so traffic wasn’t as bad as it could have been.”

@AmaABC7 @DanAshleyABC7 Hi Ama & Dan A couple of pics from this afternoon’s protest in Oakland as they passed OPD pic.twitter.com/CR3fE2qEZY

The protest group was an offshoot of the Black Lives Matter movement. “This action in particular was really about taking a strong, courageous stand in solidarity with MLK,” Mia Birdsong, a spokeswoman for the group, told SFGate.