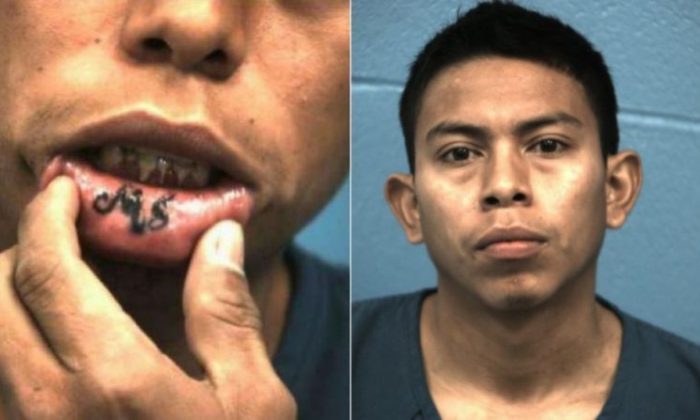 Officers arrested Bryan Funes, 17, and Jorge Alexander Cortez, 23, on Feb. 11, minutes before the pair were going to execute another MS-13 member. Melquisedec Steven Lemus-Monje, 19, was also booked on weapons and conspiracy charges.

Funes and Cortez planned to take their intended victim from Austin to Houston to kill him, according to court records obtained by the Chronicle. The gang wanted the man dead because of drug debts and other factors. Police did not clarify if the man was an active member of the gang.

Funes and Cortez are both immigrants from El Salvador.

Lemus-Monje at one point used the phrases “nine” with “candies,” which police believe refers to a 9 mm pistol.

Using what they gathered from the phone calls, police put out an arrest warrant on suspicion of a murder conspiracy.

Officers with the Texas Department of Public Safety pulled over Lemus-Monje, the target and another MS-13 member on Feb. 11 due to an expired registration. Lemus-Monje was arrested for carrying a 9 mm pistol. Cortez was pulled over in a separate car and released, court records show.

Shortly after, Funes made a call saying that police had pulled him over “approximately 2 minutes before they would have killed” their target, court papers show.

Isolated MS-13 cells are displaying increased levels of coordination with the help of cellphones and encryption software, according to Steven Dudley, a senior fellow at American University’s Center for Latin American and Latino Studies and the co-director of InSight Crime.

“It’s obviously disturbing,” Dudley told Chronicle. “Because it can give them the kind of reach that they may not have had in the past.”

The FBI estimates there are about 10,000 MS-13 gang members in the United States. The gang was founded in Los Angeles in 1980s and spread to El Salvador. MS stands for Mara Salvatrucha. The gang has a long history of Satanism. Its motto is “Kill. Rape. Control”.

On the campaign trail and after taking office, President Donal Trump vowed to eradicate the transnational gang. The president gave additional resources to Immigrations and Customs Enforcement and Border Patrol, but has complained that with such a porous southern border with Mexico, MS-13 members return to the United States with relative ease.

“45 year low on illegal border crossings this year. Ice and Border Patrol Agents are doing a great job for our Country. MS-13 thugs being hit hard,” Trump wrote on Twitter on Feb. 28.

Since Trump took office, arrests of MS-13 members increased by 83 percent, according to the Daily Signal.