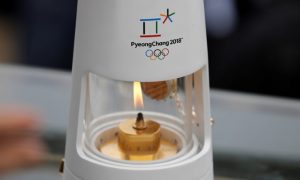 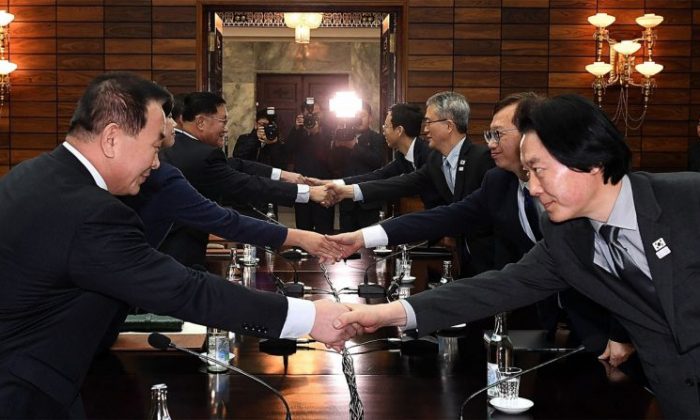 In Talks Credited to Trump, North Korea Agrees to Send Orchestra to Perform in South During Olympics

SEOUL—During rare talks credited largely to President Donald Trump’s foreign policy, North Korea agreed to send a symphonic orchestra to the South to perform at the Winter Olympics next month.

Officials from the two Koreas—technically still at war after their 1950-53 conflict ended in a truce, not a treaty—met on the North side of the border truce village of Panmunjom to discuss North Korea sending 140 performers—for the first time in 18 years—to the Olympics in Pyeongchang.

South Korea’s president credited Trump for forcing North Korea to come to the table and thanked him for bringing the two nations closers to a broader peace agreement, New York Times reported.

The two sides agreed that the orchestra would stage performances in the capital, Seoul, and at Gangneung, near Pyeongchang, the South’s Unification Ministry said in a statement.

Lee Woo-sung, Seoul’s chief negotiator, said the North had asked that the art troupe cross the border by foot via Panmunjom, located in the demilitarized zone where a North Korean soldier staged a daring defection to the South in November.

The North will dispatch a preliminary inspection team “at the earliest possible time” to hammer out logistics such as the performance venue, stage conditions, and the installation of equipment, according to a joint press release.

The decision to host the orchestra “contributes to improving relations and recovering the cultural homogeneity” between the two Koreas, the South’s ministry said.

The two Koreas separately agreed to hold working talks on Wednesday on the North’s athletes attending the Olympics, the ministry said. They will also hold talks hosted by the International Olympic Committee (IOC)on Saturday.

“The IOC will have no say on the art team. That is something that has to be discussed between the two sides,” a North Korean diplomat in Geneva told Reuters.

North Korea is pursuing its missile and nuclear programs in defiance of U.N. Security Council and other sanctions and has frequently threatened to destroy the United States and its two key Asian allies, South Korea and Japan.

In recent weeks, North Korean leader Kim Jong Un has added insults to his usual threats of wiping out the United States and its allies, calling the U.S. President Donald Trump a “mentally deranged U.S. dotard,” while Trump has derided the North Korean leader as a “maniac” and referred to him as “little rocket man.”

But fears of war have eased after the first round of intra-Korean talks in more than two years last week, which Trump has welcomed.

The North’s orchestra, called the Samjiyon Band, is the country’s main art troupe along with the Moranbong Band, women who regularly stage musical performances and plays calling for loyalty to the communist dictator.

During the orchestra’s New Year performance last year in Pyongyang, a large screen placed behind the staged displayed footage of the North’s long-range missile launch and what it claimed was its first hydrogen bomb test in 2016, calling it a “complete success,” a video clip posted by state media shows.

The North said during the talks it plans to play traditional folk songs which “fit the mood for unification and are well known in both sides,” as well as classical music, Lee, the South’s negotiator, told a news conference.

“The choice of a symphony concert is to avoid any potential controversy because there are very few modern North Korean pop songs that don’t carry a political message,” said Cheong Seong-chang, a senior fellow at the Sejong Institute think tank in South Korea.

“As a standalone North Korean performance may breed criticism that the South set the stage for Pyongyang’s propaganda, it would be desirable if the two teams perform by turns and then play together a popular song like Arirang for the finale,” Cheong said, referring to a folk song shared by the two Koreas.

North Korea is planning to send a large delegation to the Olympics in addition to the athletes and orchestra. South Korea is also seeking to form a united women’s ice hockey team with the North, according to media reports.