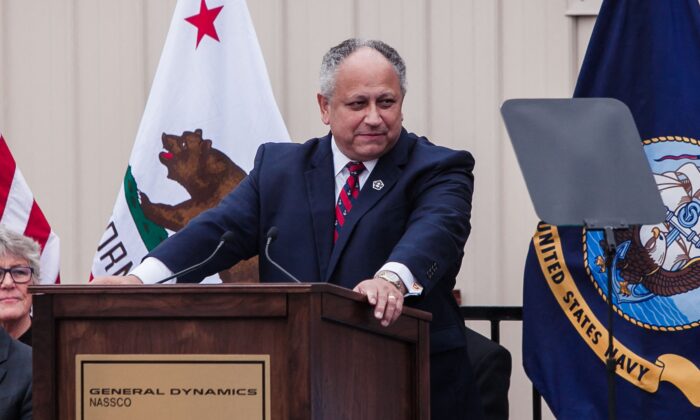 Carlos Del Toro, secretary of the Navy, speaks during an event in San Diego, Calif., on Nov. 6, 2021. (Ariana Drehsler/AFP via Getty Images)
US News

The Navy has discharged 240 sailors for refusal to abide by the military’s COVID-19 vaccine mandate, the military branch said on Feb. 9.

Of the discharged, all but one were active-duty.

Twenty-two were discharged during their initial training periods, or within their first 180 days of active duty.

The Navy mandated active-duty sailors be fully vaccinated for COVID-19 by Nov. 28, 2021. Reserve troops had until Dec. 28, 2021. The Navy started discharging sailors in January.

Some sailors have been waiting on decisions on exemption requests from the mandate on religious or medical grounds.

Approximately 8,329 sailors remain unvaccinated as of Feb. 9, or about 2.4 percent of the force.

Military lawyers say the Navy is discriminating against religious sailors and a federal judge agreed in January, ordering the branch to stop taking adverse action from a group of 35 service members who sued over the mandate.

“The Navy provides a religious accommodation process, but by all accounts, it is theater. The Navy has not granted a religious exemption to any vaccine in recent memory. It merely rubber stamps each denial,” U.S. District Judge Reed O’Connor, a George W. Bush nominee, wrote in his ruling.

Military officials argue judges shouldn’t have jurisdiction over the military’s health and readiness policies and that plaintiffs didn’t exhaust all of their efforts, assertions O’Connor and at least one other judge have rejected.

Defense Secretary Lloyd Austin, a Biden nominee, imposed the COVID-19 vaccine mandate in August 2021. Vaccination requirements were “necessary to protect the force and defend the American people,” he wrote in a memorandum.

Only two branches, the Air Force and Marines, have granted any religious exemption requests. The Air Force said on Feb. 8 it has approved nine such requests out of over 5,700 submitted. Marine officials have granted three. Besides the Navy, the Army and Coast Guard have granted none.

Many of the rejected troops were determined by chaplains to have sincere belief. That revelation “confirms what many of us suspected, which is that the procedure for service members to submit religious exemption requests is basically bogus,” Jay Richards, a senior research fellow in the Heritage Foundation’s DeVos Center for Religion and Civil Society, told The Epoch Times in a previous interview.

Military officials have defended the treatment of exemption requests and have shown no sign of easing the mandate, even as the vaccines provide less protection against the Omicron variant of the CCP (Chinese Communist Party) virus. At the same time, the military has decided against requiring booster shots.

U.S. health officials say everybody 12 or older should get a booster when they’re eligible to maximize protection against the virus, which causes COVID-19.