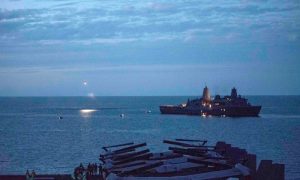 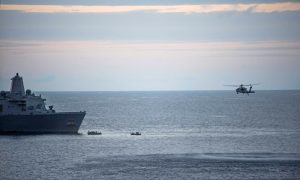 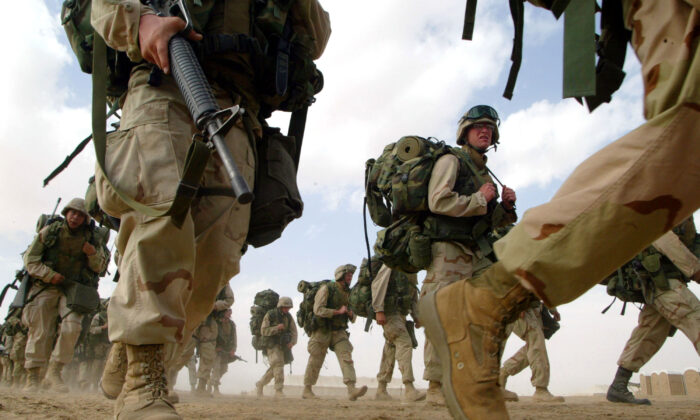 U.S. Marines from the 1st Marine Division return from a six-mile march near the Iraqi border in Kuwait on Feb. 15, 2003. (Joe Raedle/Getty Images)
US News

Two dozen U.S. Marines have received less-than-honorable discharges following allegations that they were involved in drug-related and human trafficking crimes, according to Military.com.

The Marines, who are all members of the California-based 1st Marine Division, have been kicked out of the service following an investigation, and at least one has received a prison sentence, a spokeswoman for the unit told Military.com.

The 24 Marines were arrested during battalion formation at Camp Pendleton in July 2019, and were handed varying punishments of either judicial or administrative action over the offenses, with one sentenced to 18 months in a military prison, spokeswoman Kendra Motz said.

Nine Marines with the most serious cases were sent to courts-martial. Eight who faced trial pleaded guilty and were dismissed under less-than-honorable discharges, including two bad conduct charges, Motz confirmed.

Another Marine is pending general court-martial—considered the most serious of military trials—while a further 15 Marines charged with lesser offenses were also dismissed under less-than-honorable conditions.

“All cases were handled at the appropriate level and with respect to the rule of law,” Motz said.

The agents reportedly spotted three undocumented immigrants get into a vehicle near Tecate, and determined that they were being transported by the Marines. They said Francisco Saul Rojas-Hernandez had recruited them to transport people who’d crossed the border.

Rojas-Hernandez—believed to be the ringleader of the operation—was arrested in January in San Diego County after investigators learned he had recruited and paid individuals to carry out smuggling operations and transport unauthorized immigrants through San Diego after they crossed the U.S.-Mexico border.

Following the initial arrests of Law and Salazar-Quintero, officers learned of the other crimes that the 24 Marines are accused of, according to court documents. The remaining Marines were arrested by the Naval Criminal Investigative Service (NCIS) days later.

Motz said the Marine Corps has a duty to the American people “to be the most ready when the nation is least ready,” according to Military.com.

“We will continue to enforce the standards of honor, courage, and commitment that serve as the great hallmarks of our Corps.”