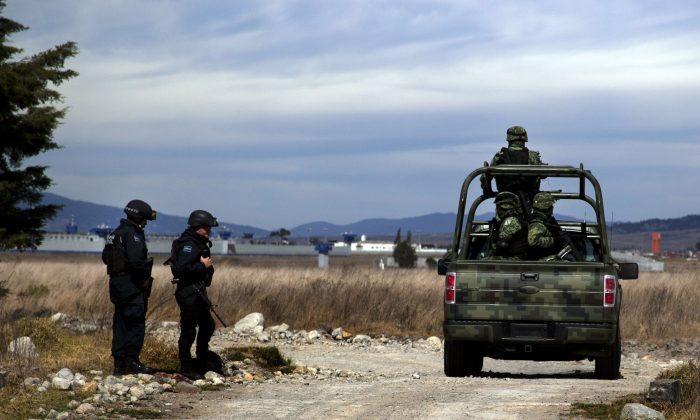 Federal Police and soldiers patrol on the perimeters of the Altiplano maximum security prison in Almoloya, west of Mexico City, Saturday, Jan. 9, 2016, where Joaquin "El Chapo" Guzman, head of the Sinaloa drug cartel, is being held after his recapture on Friday. Guzman was sent back to the maximum-security prison from where he escaped last July 11 through an elaborate tunnel that was dug to shower stall. (AP Photo/Marco Ugarte)
US

The sting known as Mexican Operation Diablo Express took place all of Friday as numerous law enforcement agencies converged onto Lukeville, Arizona, which sits on the border with Mexico.

Homeland Security Investigations, a unit of the U.S. Immigration and Customs Enforcement agency, helped Mexican authorities nab 24 alleged members of the Sinaloa Cartel, one of Mexico’s biggest drug-trafficking organizations, who were operating around Sonoyta, Mexico, and the U.S. border, spokeswoman Gillian M. Christensen said. The DEA, FBI, Customs and Border Protection and Arizona state and local agencies were on hand to assist.

“The targeted Sinaloa cell has been responsible for the importation of millions of pounds of illegal drugs, including marijuana, heroin, cocaine and methamphetamine, into the United States from Mexico during its existence. The organization is also responsible for the smuggling of millions of dollars in U.S. currency, along with weapons, into Mexico,” Christensen said in a statement.

The operation was conducted “with utmost secrecy” and took all day Friday as numerous law enforcement officers worked in both Lukeville and Sonoyta, bordering cities that are on the route to the Puerto Peñasco, the popular beach destination many Americans know as Rocky Point.

ICE helped Mexican federal police into the U.S. to keep them safe during the operation, Christensen said.

The sting also netted the seizure of several assault-type weapons and hundreds of pounds of drugs.

“ICE applauds the Government of Mexico for their bold action in taking down this criminal organization and for their continued pressure on the Sinaloa Cartel throughout Mexico,” Christensen said.

The arrests are the latest blow to the Sinaloa Cartel after the arrest of drug lord Joaquin “El Chapo” Guzman on Jan. 8, six months after he tunneled out of a top-security Mexican prison for the second time.

The Mexican government says it is cooperating with an extradition request for Guzman from the U.S.

The 24 people arrested on Friday have not been identified. They are in the custody of Mexican authorities, and the U.S. will seek extradition.