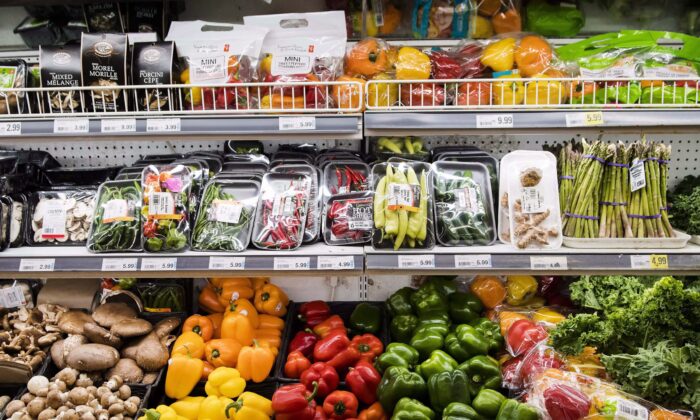 Produce is shown in a grocery store in Toronto on Nov. 30, 2018. (Nathan Denette/The Canadian Press)
Canada

24 Percent of Canadians Are Buying Less Food Due to Rising Inflation: Report

Almost a quarter of Canadians are buying less food as they struggle to keep pace with higher food prices due to inflation, says a new report by a food research lab.

In a study to understand how rising inflation has impacted Canadians, Agri-Food Analytics Lab (AAL) at Dalhousie University found that 23.6 percent of Canadians have cut back on the amount of food they purchased in the past year to make ends meet.

The study, which includes a survey conducted in partnership with Caddle, also noted that 8.2 percent of Canadians have changed their diet to save money while another 7.1 percent have skipped meals to cope with rising food prices.

“This is the dark side of food inflation,” said Sylvain Charlebois, professor and senior director of AAL in an interview with BNN Bloomberg on Sept. 20, whose study was published on the same day.

“A lot of people out there are struggling with higher prices.”

The survey, conducted between Sept. 8 and Sept. 10, involved 5,000 Canadians nationwide who were asked how rising food prices have changed the way they shop for groceries and make dietary compromises.

“In total, we estimate that about three Canadians in four have made changes to how they buy food in the last 12 months to deal with food inflation,” the report said.

Charlebois said unlike the food inflation that happened four decades ago, which only lasted for just a few months, the current one will stay for a while.

“Food inflation dilemma has been lingering for quite some time,” he said. “In fact, our food inflation has outpaced the general rate for several months now.”

According to Statistics Canada on Sept. 20, the inflation rate rose 7 percent on a year-over-year basis in August. Although this rate is lower than the one in July (7.6 percent), grocery prices have risen 10.8 percent since last year—the fastest pace since 1981.

Findings from the survey indicate that Canadians are looking at other places to buy food, including discounters, discount grocery stores, and dollar stores as well.

New shopping habits include 8 percent of Canadians saying they have changed their primary grocery store where they used to buy most of their food, the report said, and 12.9 percent said they have started visiting more than one store in the last year.

Canadians have also adopted waste reduction and private store labels as part of their strategies to cope with rising food costs, the report said.

A total of 40.6 percent of respondents said they have tried to waste less food compared to a year ago, while 21 percent are now buying more privately labeled food products. Another 18 percent said they are buying food in bulk more often.

“Also, 19.7 percent of Canadians are buying more food that is about to expire,” the report added.

Some have decided to be self-reliant with 15.5 percent of them growing their own food in the past year. Ontario has the highest percentage at 17.4 percent, followed by British Columbia at 16.2 percent, the Atlantic (15.2 percent), Quebec (13.7 percent), and the Prairies (13.1 percent).

“Now we’re seeing Canadians just committing to a different strategy because they know they don’t have much of a choice,” Charlebois said.