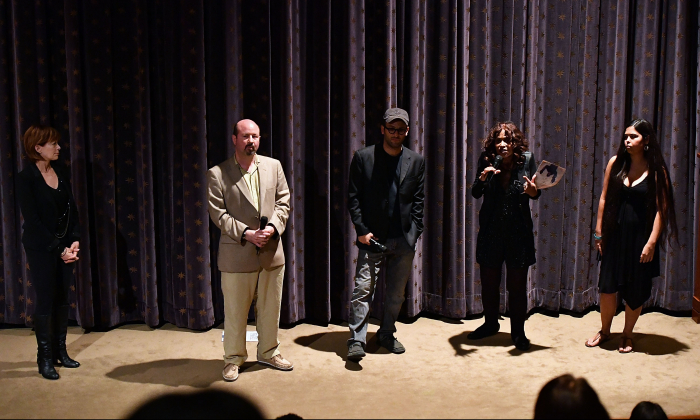 Scientist Michael Mann, second from left, attends the New York screening of the HBO Documentary "How To Let Go Of The World And All The Things Climate Can't Change" on June 21, 2016 in New York City. (Slaven Vlasic/Getty Images for HBO)
US News

Twenty-four media organizations, including The Washington Post, NBC Universal, and Fox News, have sided with the conservative National Review and free market-leaning Competitive Enterprise Institute (CEI) over a defamation lawsuit brought by a leading climate scientist.

The organizations, which also included the Society of Professional Journalists and the American Civil Liberties Union of the District of Columbia, were signatories to a Feb. 13, letter filed with the D.C. Circuit Court of Appeals, in which both the National Review and the Competitive Enterprise Institute requested a rehearing of their case before the full appeals court.

In December 2018, a three-judge panel amended a previous ruling against them. But according to the Reporters Committee for the Freedom of the Press, which represents the two-dozen media groups, a full rehearing of the case is now “warranted.”

“The panel’s decision on the merits of plaintiff’s defamation claim … may have unintended and undesirable consequences in future cases implicating the exercise of amici’s right to freedom of speech and of the press,” attorneys for the Reporters Committee stated.

The letter also said that if a rehearing is granted, the Reporters Committee would file a new amicus brief further articulating its First Amendment concerns, and would seek to take part in oral arguments.

The dispute began in July 2012, when an adjunct analyst at the CEI posted a column on the Washington-based think tank’s website, criticizing world-renowned climate scientist Michael Mann and a 2010 investigation of his work by Pennsylvania State University, where he serves as director of the university’s Earth System Science Center.

Mann is credited with developing the so-called “hockey stick graph,” which shows a centuries-long duration of stable climate temperatures and a sharp, upward-sloping temperature increase in recent decades.

The graph, along with Mann’s underlying research, helped galvanize popular support for global warming concerns since it was first published in 1998. Notably, the graph was featured in former Vice President Al Gore’s 2006 Oscar-winning documentary, “An Inconvenient Truth.”

Mann has remained at the forefront of climate science, winning numerous awards and penning scores of peer-reviewed articles. In April 2018, he celebrated the 20th anniversary of his signature graph, and encouraged other scientists “to speak out boldly.”

“I have been vilified on the editorial pages of The Wall Street Journal and other conservative media outlets, and subject to inquisitions by fossil fuel industry-funded senators, congressmen, and attorneys general,” Mann wrote in the Scientific American.

“Yet, in the 20 years since the original hockey stick publication, independent studies, again and again, have overwhelmingly reaffirmed our findings, including the key conclusion: recent warming is unprecedented over at least the past millennium,” he said.

The 2012 CEI blog post, titled “The Other Scandal in Unhappy Valley,” briefly mentioned a report about a child sex abuse scandal involving Penn State football coach Jerry Sandusky before accusing Mann at length of “data manipulation” to produce the blade of the famous hockey stick.

Citing leaked emails and computer models from the Climate Research Unit at the University of East Anglia, as well as criticism from MIT professor Richard Lindzen, the CEI post declared that Penn State’s exonerating investigation of Mann’s alleged research impropriety was a “whitewash” and a “coverup.”

“Despite the fact that it was completely internal to Penn State, and they didn’t bother to interview anyone except Mann himself, and seemingly ignored the contents of the emails, the warmongers declared him exonerated (and the biggest victim in the history of the world),” the post said.

National Review humorist Mark Steyn took his usual mockery to another level. According to court documents, Steyn cited excerpts of the CEI blog in a July 2012 article, called “Football and Hockey,” while calling Mann “the Jerry Sandusky of climate science.”

“He has molested and tortured data in the service of politicized science that could have dire economic consequences for the nation and the planet,” Steyn wrote, according to Mann’s initial complaint.

“Michael Mann was behind the fraudulent climate change hockey stick graph, the very ringmaster of the three-ring circus,” the complaint aded.

Mann demanded retractions from both CEI and National Review, but his demands were rejected. Mann then sued in D.C. Superior Court in October 2012.

In response, the groups cited the District of Columbia’s anti-SLAPP law and Mann’s status as a public figure. Anti-SLAPP, or anti-strategic lawsuit against public participation, is a common freedom of speech defense against censorship, intimidation and the general silencing of criticism.

That defense, however, was dismissed and the CEI and National Review appealed in November 2014. More than two years later, the D.C. Court of Appeals ruled against the defendants but dismissed several of Mann’s other claims, including the intentional infliction of emotional distress.

The appeals court then amended its decision in December 2018, and a new set of petitions began to be filed to rehear the case.

All of CEI and National Review’s supporting media allies, as listed on the Feb. 13, court filing, joined a previous Reporters Committee-led amicus brief when the case was first appealed.

During that phase of the dispute, the ACLU of the District of Columbia expressed “no view on the merits of Prof. Mann’s case,” but argued that the statements at issue were constitutionally protected.