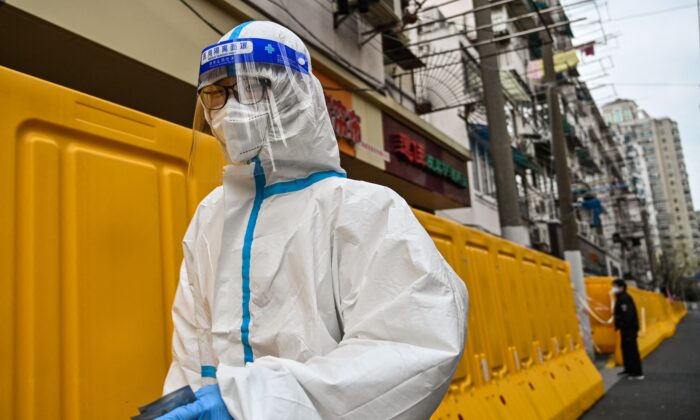 A worker wearing a protective gear walks next to barriers that separate from the street a neighborhood in lockdown as a measure against COVID-19 in Jing'an district, Shanghai, on March 30, 2022. (Hector Retamal/AFP via Getty Images)
INSIDE CHINA

Western diplomats have voiced alarm about the Chinese regime separating children from their parents as part of its COVID-19 virus curbs, a scenario already occurring in Shanghai despite widespread outrage.

Adhering to the regime’s stringent rule of isolating all possible virus contacts, Shanghai has quarantined hundreds of children under the age of 6 after they tested positive for COVID-19, even though most of them have shown no symptoms.

The forced child separations and lack of information about the children after they were taken away have left many parents in distress, while footage of toddlers at a Shanghai medical facility left crying without adult attendance set off a storm of outrage over the weekend.

Concerns that Chinese officials might treat foreign citizens in a similar fashion prompted diplomats from more than two dozen countries to write to the Chinese foreign ministry urging Beijing against such a move.

“We request that parents and children should never be separated regardless of the circumstances,” stated a letter signed by the Consulate General of France in Shanghai dated March 31, a screenshot of which was circulated on Chinese social media and quickly became viral. The consulate said it was writing the letter on behalf of 23 other European countries, including Germany, Italy, Switzerland, and Norway.

Those who have exposure to patients but aren’t infected should be allowed to self-isolate at home rather than being sent to a centralized quarantine facility, and pets of owners who are in quarantine should be fed regularly, the letter stated.

The correspondence also came after expats in Shanghai complained about the difficulties living under the city’s expansive lockdown that began three days earlier.

Echoing a surge of online pleas from those seeking medical help in Shanghai and other locked down cities, the diplomats also stressed that their citizens “must be ensured timely emergency medical assistance during the lockdown.”

France and Norway’s consulates in the city couldn’t be reached by phone on April 4. A staff member at the Consulate General of Switzerland in Shanghai confirmed the document to be authentic and said they have signed on to the letter, and referred to the Shanghai Foreign Affairs Office for further information. The office didn’t return phone calls for inquiries.

The British Embassy separately wrote a letter to the Chinese foreign ministry on the same day raising similar concerns, according to Reuters. That letter’s co-signatories include European Union states as well as Australia and New Zealand.

The embassy cited the lack of privacy and sanitation concerns at the mobile hospitals deployed recently. Isolating in diplomatic housing was a “preferable solution and consistent with our Vienna Convention privileges,” it said in the letter.

“The British Consulate-General in Shanghai has been raising its concerns about various aspects of the current COVID-19 policies in relation to all British Nationals in China, with the relevant Chinese authorities,” a spokesperson for the consulate told Reuters.

The U.S. Consulate General in Shanghai, which didn’t appear on either letter, didn’t respond to a request by The Epoch Times for comment.

In all, more than 30 countries signed on to the letters voicing concern over Beijing’s COVID-19 policies, Reuters reported.

Wu Qianyu, an official with the city’s health commission, said on April 4 that parents could only stay with their children if they are also infected. Children under the age of 7 will stay in Shanghai Public Health Clinical Center—where the videos first emerged—if their parents don’t qualify to accompany them. Other children will be sent to centralized quarantine centers, she said, adding that the policies may be adjusted in the future.

Her comments brought objections from many parents on Chinese social media.

“I’m also a father, and every time I see this topic, I just want to cry,” one user wrote. “I’d rather get infected together, but I have to stay with my child.”