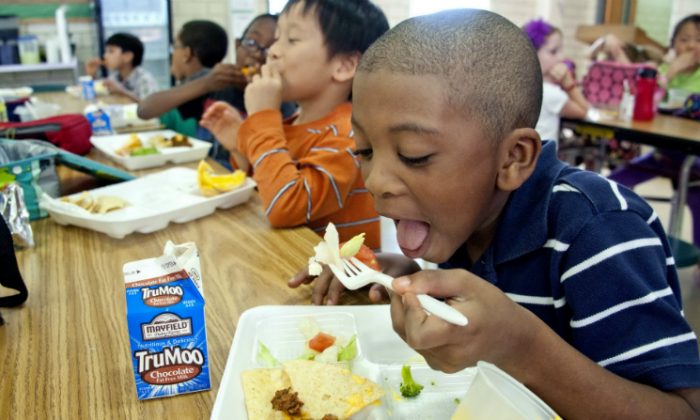 The Trump administration is set to ease Obama-era rules that prohibited 1 percent fat chocolate milk from being served in public school lunchrooms.

The Department of Agriculture issued an interim rule set to take effect on July 1 that lets 1 percent chocolate milk back into school lunchrooms nationwide and relaxes requirements on whole grains and sodium content.

The current rules were pioneered by former First Lady Michelle Obama and allow schools to serve plain milk with 1 percent fat or flavored milk that is non-fat, ABC News reported.

“This is not reducing the nutritional standards whatsoever,” Agriculture Secretary Sonny Perdue told reporters when he unveiled the proposed changes in May. “I wouldn’t be as big as I am today without flavored milk.”

“Schools need flexibility in menu planning so they can serve nutritious and appealing meals,” Perdue said in a statement Thursday. “Schools want to offer food that students actually want to eat. It doesn’t do any good to serve nutritious meals if they wind up in the trash can.”

The USDA’s Food and Nutrition Service department operates the National School Lunch Program which served more than 30 million students daily in 2016. Some children are eligible for free or reduced-cost lunches based on a number of eligibility criteria.

Michele Obama championed the tightened standards as part of her campaign against obesity. The resulting measure was titled the Healthy, Hunger-Free Kids Act.

The tightening of the rules triggered a backlash from students who noticed a reduction in quality of school lunches when the rules went into effect in 2010. Many took to social media with the #ThanksMichelleObama hashtag to post pictures of their meals.