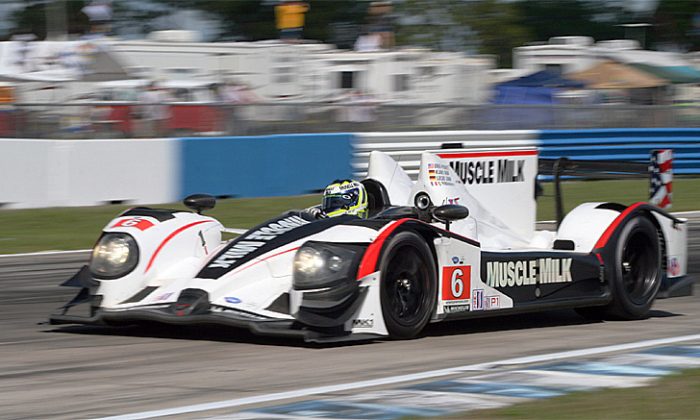 The Falken Tire Porsche has an upgraded chassis and a brand new tire for Monterey. (James Fish/Epoch Times Staff)
Motorsports

The third round of the 2012 ALMS season, American Le Mans Series Monterey is a test for drivers and teams. A six-hour race around the challenging 11-turn, 2.238-mile with its quick corners and dramatic elevation changes, Monterey demands precise driving, controlled aggression, and correct strategy.

Muscle Milk Pickett Racing considers Monterey its home vent, as the Mazda Raceway Laguna Seca isn’t far from team headquarters in Benicia, Calif. The P1 team has yet to win here, though it has scored podiums. After winning at Long Beach in March, the team hopes to keep the momentum going.

While many teams bring in a third for the six-hour event, Muscle Milk Pickett is sticking with the duo of Lucas Luhr and Klaus Graf at the wheel of the #6 Muscle Milk HPD ARX-03a.

“Klaus and I feel very good going into the race. The team did a great job at Long Beach and I’m sure they will keep it up at Laguna Seca,” Lucas Luhr said in a team media release.

“It should be a very interesting race. The track is very tricky because there is always a lot of sand that ends up on it and that makes it difficult sometimes to find the right set up for these conditions.

“From a Championship point of view, it has a little more importance because it’s a six-hour race there are more points available and with the title as our main objective this year it could become very important.”

Muscle Milk Pickett is probably the favorite for an overall win. The team nearly won at Sebring, foiled only by a late-race fuel-filler failure, and won going away at Long Beach. Still Monterey with its longer format and full grid, provide lots of chances for things to go wrong as well.

“We want to build on the success from our win at the last race and take the lead in the ALMS Championship,” Klaus Graf explained. “However six hours around Laguna Seca is a long time, traffic will be brutal, track conditions will change a lot and the race will ask for the full concentration of everyone on the team.”

Muscle Milk also fields the #5 Muscle Milk/ Molecule Oreca FLM09 for drivers Memo Gidley and Mike Guasch, joined at Laguna Seca by Archie Hamilton. Third in points, the car finished second in class at Long Beach, and would dearly love a class win in front of the home crowd.

P2 team Conquest Racing is equally eager to race at Laguna Seca, having very nearly won at Long Beach with a brand new Nissan powerplant in the team’s Morgan prototype. A late stop for a splash of fuel cost the team a class win, but Thursday testing has given the team more miles with the new motor.

Conquest has also added a driver for Monterey; regulars Martin Plowman and David Heinemeier Hansson will be joined by former F1 pilot Antonio Pizzonia. This will be Pizzonia’s first race behind the wheel of a sports car, but he said he was eager, in a teram press release.

“I’m really looking forward to working with Conquest Endurance this weekend. It will be my first experience with this car and also with this type of racing but I have experience in many categories, which will be helpful in this situation. And I know that I will certainly have help from my teammates to get used to everything over the weekend so that we can have a strong race,” said the 31-year-old Brazilian.

“I’ve never been to Laguna Seca I my life before but thanks to iRacing I feel like I’ve been here many times,” said Martin Plowman. “I’ve probably logged about a million laps here in the simulator so I think I’ll feel at home in the track. After Long Beach we are really eager to make amends and once again show what we can do. We have a very strong car and adding Antonio [Pizzonia] this weekend really gives us a realistic shot at the win.”

David Heinemeier Hansson has fond memories of racing at Laguna Seca. “I loved racing at Laguna last year in the IMSA GT3 Challenge,” he said. “It’s a wonderful track and one that I think uniquely plays to the strengths of our Morgan-Nissan car with all the medium speed third and fourth gear corners. With all the small issues that kept us from taking a deserved win at Long Beach, our goals is no doubt the top step of the podium.”