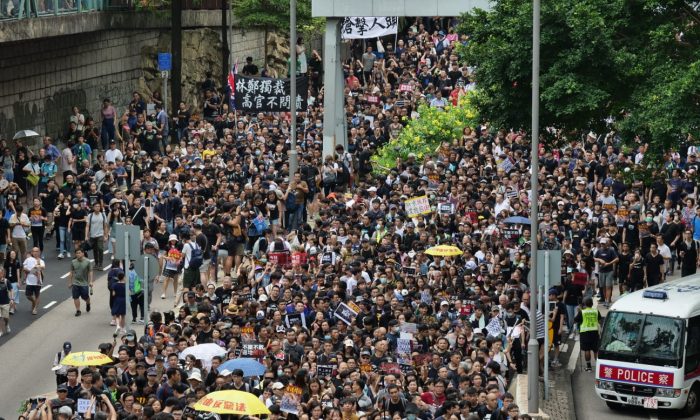 230,000 March in Hong Kong to Reach Out to Mainland Chinese Tourists About Protest

Hundreds of thousands of Hongkongers joined the latest protest on July 7 to demand that the city government scrap a controversial extradition bill.

The march, however, differed from past ones, in that, rather than being primarily directed against the government, the protesters sought to gain the attention of mainland Chinese tourists. Pamphlets explaining Hongkongers’ concerns about the extradition bill were distributed along the march route to onlookers.

Organizers announced that an estimated 230,000 marchers took part; local police gave a much lower estimate, saying there were 56,000 people at the protest’s peak.

The targeted legislation would allow any country, including mainland China, to seek extradition of suspects. The proposal has drawn widespread opposition, with many Hongkongers worried that if the bill were to pass, Beijing could potentially pressure the city government to hand over citizens of any nationality to face trial in the Chinese regime’s opaque court system, which often disregards rule of law.

There have been three major protests in recent weeks: a march on June 9 that drew 1.03 million people; another on June 16 that drew a historic 2 million participants; and another on July 1, with more than half a million attendees. While the city’s top official, Chief Executive Carrie Lam, announced June 15 that the bill would be indefinitely suspended, many continue to call for the bill’s complete withdrawal.

Ventus Lau Wing-hong, one of the organizers behind the latest march, said that he hoped visiting mainland Chinese tourists learn why Hongkongers are protesting, since Beijing has either censored the news, or misrepresented facts in its state media coverage.

The march route took protesters through two locations that Chinese tourists often visit: Tsim Sha Tsui, a popular shopping district with luxury shops in the Kowloon district, and the West Kowloon railway station, the terminus of the Guangzhou–Shenzhen–Hong Kong Express Rail Link that travels to and from the two southern Chinese metropolises. The station also contains a cross-border checkpoint for mainland Chinese tourists traveling into Hong Kong.

Protesters began marching from the initial gathering point, Salisbury Garden in Tsim Sha Tsui, at around 3:35 p.m. local time, 25 minutes before originally scheduled, because of the large turnout.

According to Hong Kong media Stand News, the large turnout forced some protesters to take an alternative route to the final destination, the West Kowloon station.

A college senior surnamed Chan joined the march with her parents, saying that they participated because the Hong Kong government hasn’t heard their voices, despite continued protests.

“We cannot let this fire be extinguished so quickly. We haven’t gotten any of our demands yet. So I believe that every time there is an online call to action, we should continue to step out and voice our opinions, so that the international community can continue to care about [the extradition bill],” Chan said in an interview with local Epoch Times reporters.

Chan added that the legislation is the latest example of Beijing violating the ‘one country, two systems’ principle, under which China promised to preserve Hong Kong’s autonomy and freedoms when the city’s sovereignty was handed over to China from Britain in 1997.

“‘One country, two systems’ now exists in name only, because [Beijing] has infiltrated Hong Kong more and more, whether it is manipulating Hong Kong’s legislative elections, or passing certain ordinances, in total disregard to Hong Kong’s judicial independence.”

Mr. Fung, a retailer, said that if he didn’t join the march, he might not have a chance to voice his opinions in the future.

Meanwhile, a man who had also taken part in the Umbrella Movement in 2014 said Beijing has not only oppressed Hongkongers but also people inside mainland China.

“We want to tell every Chinese that the [government] that oppresses both Hongkongers and mainland Chinese is totalitarian,” To Chi-kuen told The Epoch Times.

In the 2014 protests, locals occupied main thoroughfares for 79 days to demand universal suffrage. Those protests ended without changes to the electoral system.

Along the march, protesters could be heard chanting slogans: “Release protesters who have been arrested, investigate police’s excessive use of force, immediately hold two open elections.”

The three demands, along with the bill’s full withdrawal and a request for the government to retract its previous characterization of protests as “riots,” were five demands set forth by march organizers.

Protesters have recently added the demand of universal suffrage in how the city elects its chief executive and members of its unicameral legislature, echoing the Umbrella Movement. Currently, the chief executive is voted in by an electoral committee comprised of mostly pro-Beijing elites, while only a portion of lawmakers in the legislature are directly elected by constituents in a geographical area.