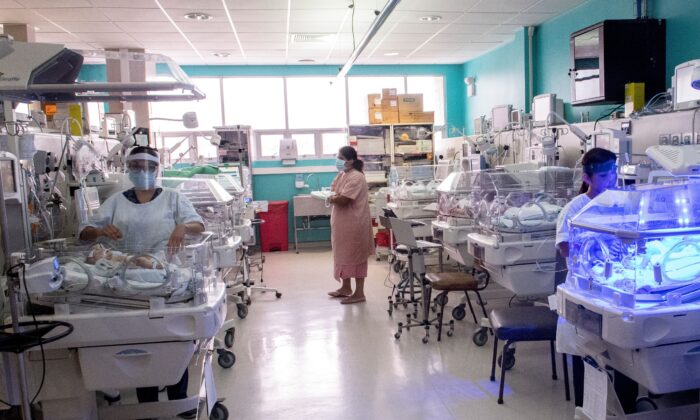 A woman (C) visits her newborn baby in a file photo, (Ezequiel Becerra/AFP via Getty Images)
US News

The U.S. Centers for Disease Control and Prevention (CDC) warned that 23 infants have been hospitalized near Nashville, Tennessee, from parechovirus, a viral infection that can cause severe illness in babies under the age of 3 months.

A recent report from the CDC this week found that between April 12 and May 24 of 2022, nearly two dozen infants were taken to Monroe Carell Jr. Children’s Hospital at Vanderbilt University Medical Center in Nashville to receive parechovirus treatment. The infants, described by the agency as “previously healthy,” were between the ages of 5 days to 3 months.

Parechovirus is a sepsis-like enterovirus that causes more significant symptoms in young children and infants, potentially posing a life-threatening risk for children under 3 months of age. There is no cure, and treatment is given to alleviate symptoms.

The agency said the 23 parechovirus cases at Monroe Carell Jr. Children’s Hospital is an “unusually large cluster of infections,” while adding that “the absence of a biennial peak in 2020 is presumably because of social isolation during the COVID-19 pandemic, suggesting that [parechovirus ] transmission is closely associated with social activity.”

But because “29 cases were detected in 2022 at the children’s hospital, including the 23 cases described in this report that were detected within a 6-week period,” the 2022 peak of “infections might reflect relaxation of COVID-19 isolation measures, consistent with increased prevalence of other respiratory viruses,” according to the agency’s report.

In the Nashville outbreak, 21 patients recovered without complications, one patient needed a six-month follow-up appointment, and another patient is expected to suffer developmental problems, said the CDC. While the most common symptoms for the infants were fever, fussiness, and poor feeding, at least one infant suffered from seizures, the agency added.

Earlier in July, the CDC released a health advisory through its Health Alert Network earlier in July that warned medical providers and health departments that parechovirus is circulating in the United States. However, the agency says parechovirus isn’t a reportable disease, meaning nationwide monitoring isn’t currently available, and testing for the virus isn’t offered at all hospitals.

“What was surprising to us, and why we put this report together, is that we saw a higher-than-usual number of babies with this infection than we’ve seen in prior years,” Dr. Ritu Banerjee, an author of the new report who works at the Nashville hospital, told NBC News this week.