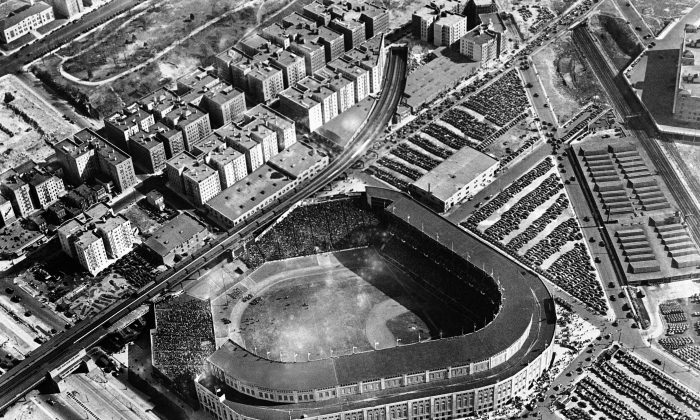 1.   Some wanted the brand new Yankee Stadium in 1923 to be called “Ruth Stadium.” They settled for the nick-name “the House That Ruth Built.”

3.   At the start, names of Yankee players were imprinted in white chalk  near the top of their lockers.

4. The practice of selling more tickets than existing seats endured until  a 1929 stampede in the right field bleachers left  two dead, 62 injured.

7.  In 1941, Yankee president Ed Barrow offered Civil Defense the use of  Yankee Stadium as a bomb shelter in case of attack. He thought the area under the stands could provide a safe haven.

9. The last home run at the original Yankee Stadium on  September 30, 1973  was hit by Duke Sims in his seventh day as a Yankee. A coin toss that day  tabbed him to play. It was not until much later that Sims realized the  significance of his home run shot.

10. The  film “61” was filmed in Detroit, not at Yankee Stadium. Billy  Crystal explained the Motor City ballpark architecture was better able to be  made to resemble that of the Yankee Stadium of 1961.

11.  Sal Durante, the guy who caught the ball Roger Maris hit for his 61st homer, bought tickets the day of the game at a less-than-sold- out Yankee  Stadium.

13.  Twenty thousand letters that Mickey Mantle never answered were not bid on in the old Yankee Stadium fire sale in 1974.

14. There was widespread and indiscriminate disposal of valuable items during demolition of much of the Stadium in the mid 1970s.

15. Among the items sold in the refurbishment “fire sale” at Yankee

Stadium were player jockstraps which had names on them for identification when they came back from the laundry. The selling  was stopped because of sanitary reasons.

16.  In 1976, a homer by Chris Chambliss gave the Yankees the American League pennant. Such a mob crowded the plate that Chambliss was taken back a few minutes after hitting the homer, and he finally touched home plate.

17. All kinds of crazy things went on in the bullpens – some of them

outlandish and some of them sexy and lots having to do with food.

18.   In 1988, behind a wall that was closed off for decades, a scorecard, a program and what was supposedly the bases for the 1936 team were unearthed.

19.  The 1990 Yankees had but one starting pitcher who won more than seven games, nine-game winner Tim Leary. But he also lost 19.

20.  On September 11, 2001 within 90 minutes of the horrific attacks on the World Trade Center, Yankee Stadium was  evacuated.

21. Ron Guidry, a good drummer, once kept a trap set at Yankee Stadium and  also played in a post-game concert with the Beach Boys.

22. Joe Torre was witness to all three perfect games in Yankee Stadium history: He saw Don Larsen’s beauty as a 16-year-old fan, and the gems spun by David Wells and David Cone from the dugout as Yankee manager.

23. Bob Sheppard holds the record for seeing the most games at Yankee Stadium.

Dr. Harvey Frommer is in his 39th year of writing books. A noted oral historian and sports journalist, the author of 42 sports books including the classics: best-selling “New York City Baseball, 1947-1957″ and best-selling “Shoeless Joe and Ragtime Baseball,” his acclaimed Remembering Yankee Stadium was published in 2008 and best-selling Remembering Fenway Park was published to acclaim in 2011. The prolific Frommer’s WHEN IT WAS JUST A GAME, AN ORAL HISTORY OF SUPER BOWL ONE will be published in 2015.