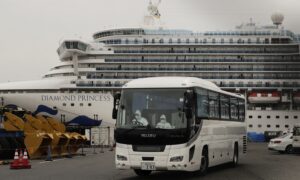 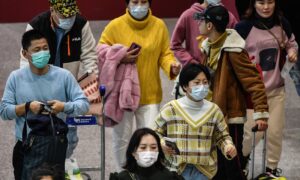 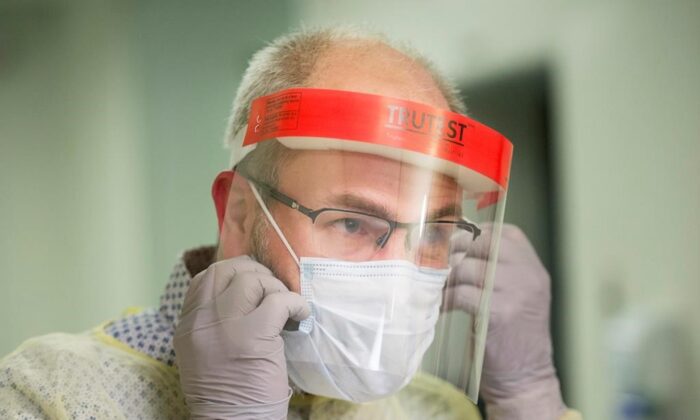 A man demonstrates how to put on a mask and other protective clothing during a tour of a COVID-19 evaluation clinic in Montreal, on March 10, 2020. (Graham Hughes/The Canadian Press)
Canada

Some 228 Canadians began a two-week quarantine at Canadian Forces Base Trenton, in Ontario, on Tuesday after being repatriated from a cruise ship that’s had a cluster of novel coronavirus cases.

Foreign Affairs Minister Francois-Philippe Champagne told reporters that a “handful” of crew members tested positive for the virus that causes the illness COVID-19, although he declined to give specific numbers.

“We have certain crew members, a very limited number of crew members, which tested positive which are Canadian on the ship, and they will remain on the ship in accordance with the protocol that has been agreed with the CDC and local and state authorities in the U.S.,” Champagne said in Ottawa outside the entrance to a cabinet meeting.

Some other Canadians remained in California for health reasons unrelated for the virus, he said.

There were 3,500 passengers and crew on board the Grand Princess cruise ship. It docked Monday at the Port of Oakland after days of being forced to idle off the coast of Northern California amid evidence it was the breeding ground for more than 20 COVID-19 cases.

Canada’s top doctor has urged Canadians to avoid all cruise travel, saying the confined quarters and frequent interactions can foster the spread of the illness.

The repatriation effort drew praise from both countries’ leaders, including U.S. President Donald Trump, who described the operation as “very dignified.”

In a meeting at the White House, he thanked both Canada and the United Kingdom for their help in repatriating their residents.

“They’re coming back, they’re being met and brought to planes and being brought very, very—in a very dignified fashion back into Canada,” Trump said.

“We appreciate all the help we’ve had in that, and that’s working out very well.”

Prime Minister Justin Trudeau, meanwhile, took to Twitter to thank the Canadian consular staff and American officials who helped the passengers to return to Canada.

Meanwhile, Canadian officials have been racing to develop a co-ordinated response to COVID-19, which has infected tens of thousands of people in 100 countries around the world.

Deputy Prime Minister Chrystia Freeland wrote the provinces and territories asking them to inform the federal government of their state of readiness and any shortages they’re facing ahead of Friday’s first-ministers meeting in Ottawa.

The meeting of Trudeau and provincial and territorial leaders will include discussions on the potential impact of the spreading virus on the country’s health-care system and its economy.

Canada had at least 79 cases of the respiratory illness as of Tuesday morning: 32 in British Columbia, 36 in Ontario, seven in Alberta and four in Quebec.

The country’s finances are healthy enough to help individuals and businesses deal with the fallout, Morneau said, without providing details of any plans or when the federal budget will be released.

He also would not reveal whether he expects the deficit to be bigger than previously projected, given the sharp decline in oil prices and the hit to financial markets on Monday, saying only that Ottawa is in a position to respond to such challenges.

The government is being urged to ease access to federal sick leave benefits, along with tax credits and other breaks, to help workers who can’t afford to stay home when sick, as well as to help small businesses that might not have the cash flow to manage the effects of the outbreak.