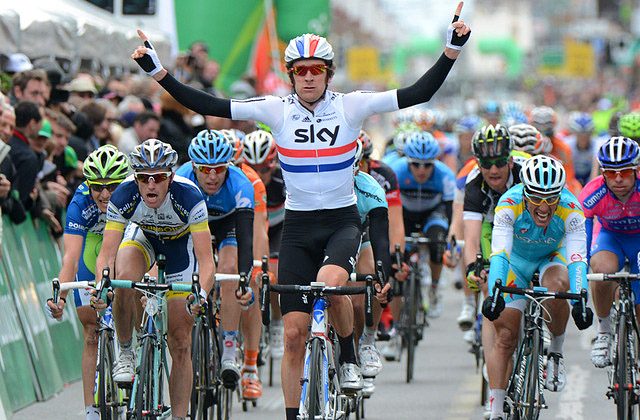 Sky’s Bradley Wiggins came to the Tour of Romandie intent on a General Classification win; his performance in Stage One showed the depth of that intent.

Sky’s leader had to ride hard to keep the leader’s jersey for his team after sprinter Mark Cavendish lost the pace with 28 km left in the hilly 185-km stage.

Wiggins then fell back with a flat tire with 25 km to go. His team dragged him back to the front with 13 km left. Then he had to cover attacks in the final few kilometers, led the whole peloton for the final 1000 meters, and flat-out sprinted the last 400 to win the stage and keep the leader’s jersey.

“I had a lot of adrenaline after I punctured with 25k to go. When that happened the boys dropped back for me and did a fantastic job,” Wiggins commented on the Sky website.

“In the final I was kind of on my own and marshalling everything. I just wanted to pay them back for everything they’d done, they were incredible. I’ve got them to thank and it was really nice to be able to finish it off like that.

“I went a bit early and had to sit down to rest for a bit and then went again but it was good to get the win!

“I want to win Romandie, that’s for sure. I’ll take what I can every day and it’s really nice to win a sprint like this because normally I only ever really win time trials.”

The hilly 185-kilometer stage with two Cat 2s and a Cat 3 climb, the last two in the final 25 kilometers, seemed equally suited to a breakaway or a sprint finish. The climbs were serious enough to slow the pure sprinters, but if they could survive, the end of the route was suited to a bunch sprint.

Sky certainly intended to bring their sprinter, Mark Cavendish, to the end, certain that he could beat the field; because the entire race only offers two possible sprint finishes, most other big name-sprinters weren’t in attendance. Sky knew Gerraint Thomas, fresh from the European track season, wouldn’t be able to hold the leader’s jersey, but were confidant Cavendish could keep it for the team.

Things didn’t work out at all as planned. After helping to bring back the four-rider break of Martin Kohler (BMC,) Kenny Dehaes (Lotto-Belisol,) Angelo Tulik (Europcar,) and Jimmy Engoulvent (Saur-Sojasun,) Cavendish dropped off the back early on the last Cat 2 climb. Thomas also cracked on this climb, and with 28 km to go, Martin Kohler forged on ahead alone.

The chase had pushed too hard, too soon. Not only did Sky burn out its sprinter, they brought the break back too far out; this invited further attacks, and they came in quantity.

Fabrice Jeandesboz of Saur Sojasun attacked first, chased by Cyril Gautier of Europcar) and Thomas Rohregger of RadioShack. At 24 km Thibaut Pinot of FDJ attacked. None of these moves served to do anything but make the peloton nervous and wear out the leaders.

As this was happening Sky disappeared from the front of the peloton. Bradley Wiggins had a puncture, and the entire team dropped back with him. This prompted some more serious attacks, as large groups of riders realized that without Sky pulling, a breakaway might well stay away all the way to the finish.

Sky stepped up. Determined to win the stage and the leader’s jersey, the remnants of the team dragged Wiggins back to the front with a huge effort.

This didn’t stop the attacks. Thirteen km from the finish, on the slopes of the final Cat 3 climb, Saxo Bank’s Daniel Navarro took a try. He was joined by Ag2R’s Rinaldo Nocentini and Saur Sojasun’s Maxime Mederel.

This trio lasted until seven kilometers form the end; luckily for Sky, BMC and Astana took over the chase duties, letting the Sky riders rest their legs.

Rabobank’s Laurans Ten Dam was the next to attack, unsuccessfully. Movistar’s Rui Costa then got away, chased by Katusha’s Giampaolo Caruso This pair lasted three kilometers, then Europcar’s Pierre Rolland struck out, followed by Fabrice Jeandesboz. Costa caught this pair and went right over them. Then, surprisingly, Bradley Wiggins latched on to Costa. Apparently the Sky leader had rested enough.

Three Rabobank riders came up on the left, but couldn’t get away. Movistar’s Angel Madrazo took a flyer off the front and was ridden down by Rabobank.

With two kilometers to go Rabobank held the lead. The two riders from Liquigas moved to the front, with Wiggins and BMC’s Cadel Evans marking every move. Evans had a Tejay Van Garderen to help him; Wiggins was on his own through the last kilometer.

It didn’t matter. Wiggins had determination enough to overcome any obstacle. He started sprinting 300 meters from the line and kept it up until he won the Stage and the leader’s jersey.

Stage Two is a lot like Stage One; the hills are a little bigger if less numerous. The first categorized climb, a Cat 3, falls 50 km into the 149-km stage, followed by Cat 2s halfway and then 30 km from the finish. The final 15 km are uphill, if not actually up a hill, so once again the climbers might end up sprinting for the win.