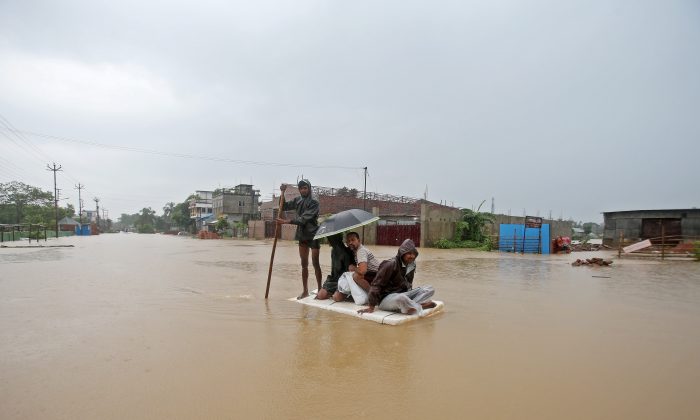 Villagers use a makeshift raft to cross a flooded area on the outskirts of Agartala, India on July 15, 2019. (Jayanta Dey/Reuters)
Asia & Pacific

At least 227 people have died since flash floods ravaged swathes of South Asia over the weekend, officials said on Thursday, July 18.

Flooding and landslides, triggered by torrential monsoon rains, have swept across India, Nepal, Pakistan, and Bangladesh, leaving devastation in each country.

The northeastern Indian states of Bihar and Assam were hit particularly hard. The death toll has risen to 67 in Bihar and 10 in Assam, with more than 10.3 million people affected in total, according to the states’ disaster management authorities.

In Bihar, the rains have eased, allowing the full extent of the damage to become clear. As the floodwaters recede, the bodies of previously undiscovered victims are being recovered, said state officials Thursday.

The two Indian states have set up more than 900 relief camps and temporary shelters for evacuees and displaced families, who number over 265,000.

In Nepal, the death toll has reached 88, according to the Home Ministry. There, the worst of the disaster seems to have passed, say aid workers on the ground—many people are beginning to return to their homes, and the number of people in relief camps has dropped from 17,000 to about 11,000.

In Pakistan-controlled Kashmir and the Pakistani city of Lahore, 46 people have died from the floods, according to disaster management officials.

The rains represent only the beginning of the monsoon season, which stretches on until September. Though the flood waters are now subsiding, the crisis continues for many of the affected families. Hundreds of homes have been damaged or completely destroyed, and they must race to rebuild them before heavier rains come.

Those unable to return to their waterlogged homes, must make do in cramped and under-resourced relief shelters. As space and clean drinking water run out, aid organizations are working overtime to prevent possible outbreaks of waterborne diseases like cholera or diarrhea, which can be deadly for children.

The floods also come as nearby Thailand braces for what could be the worst drought of the decade, according to the country’s Meteorological Department. The average rainfall over the last five months has fallen fall short of the average for parts of the country.

The state’s Kaziranga National Park, home to endangered one-horned rhinos and tigers, was waist-deep in water, with animals sheltering in higher areas, and some straying into villages.

On Thursday, an adult tiger was found sleeping on a bed in a house on the edge of the sanctuary. “It appears the tiger strayed into a human settlement area to escape the floods and now appears very tired,” park director Shiv Kumar told Reuters.

“We are preparing to tranquilize the tiger.”

The floods have killed at least 43 animals, but authorities worry that poachers could take advantage of the deluge to target animals, especially one-horned rhinos, whose numbers are down to about 3,500 worldwide.

“The biggest worry during the floods is from poachers who might take advantage of the rhinos moving to the hills and kill the animals for their horn,” said Assam Forest Minister Parimal Suklabaidya.