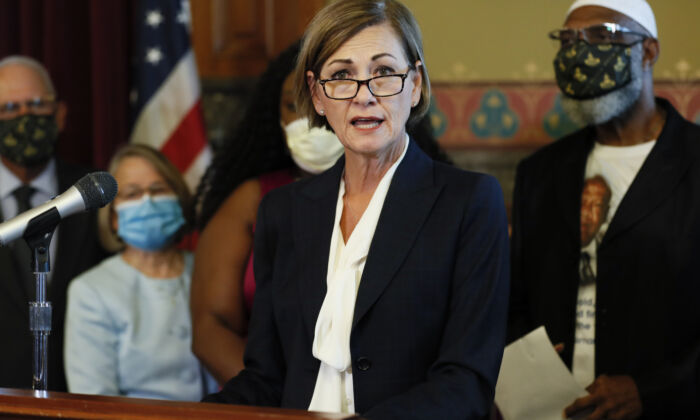 A group of Republican governors, led by Iowa’s Kim Reynolds, penned a letter to President Joe Biden on Sept. 12, saying his student loan forgiveness plan shifts the burden from the rich to “working Americans.”

The letter (pdf), signed by 22 governors, notes that Biden’s unprecedented debt cancellation plan means every U.S. taxpayer will bear an extra burden of $2,000. The governors said the price was unaffordable for residents in their states amid sky-high inflation.

“As governors, we support making higher education more affordable and accessible for students in our states, but we fundamentally oppose your plan to force American taxpayers to pay off the student loan debt of an elite few–a plan that is estimated to cost the American taxpayer more than $2,000 each or $600 billion total, a price the people of our states cannot afford,” the group wrote in the letter, which was first reported by Fox News.

Biden announced last month that he will forgive up to $10,000 in federal student loan debt for individual borrowers earning less than $125,000 per year, or $20,000 for Pell Grant recipients meeting the same income standards.

If the ambitious initiative is implemented, the National Taxpayers Union Foundation estimates it could cost U.S. taxpayers more than $2,500 each.

“Only 16-17 percent of Americans have federal student loan debt, and yet, your plan will require their debts be redistributed and paid by the vast majority of taxpayers,” they wrote. “Borrowers with the most debt, such as $50,000 or more, almost exclusively have graduate degrees, meaning hourly workers will pay off the master’s and doctorate degrees of high salaried lawyers, doctors, and professors.

“What’s more, the top 20 percent of earning households hold $3 in student debt for every $1 held by the bottom quintile, generating a lopsided reality where the wealthy benefit at the expense of the working,” they wrote. “Simply put, your plan rewards the rich and punishes the poor.”

“A high-cost degree is not the key to unlocking the American Dream—hard work and personal responsibility is. For many borrowers, they worked hard, made sacrifices, and paid off their debt. For many others, they chose hard work and a paycheck rather than more school and a loan. Americans who did not choose to take out student loans themselves should certainly not be forced to pay for the student loans of others.”

“Even economists from your own party oppose your plan for raising demand and increasing inflation,” they wrote. “Rather than addressing the rising cost of tuition for higher education or working to lower interest rates for student loans, your plan kicks the can down the road and makes today’s problems worse for tomorrow’s students.”

Beyond these issues, the Republican signatories also contend that Biden may have overstepped his authority to enact such wide-reaching student local relief. They urged the president to withdraw the initiative immediately.

“As president, you lack the authority to wield unilateral action to usher in a sweeping student loan cancellation plan, a position shared by leaders of your party,” they wrote.

“He can postpone, he can delay, but he does not have that power,” Pelosi told reporters at a press briefing in July 2021. “That has to be an act of Congress.”

“Although we may disagree on many things, your statement in July 2021 was correct,” 94 Republican lawmakers, led by Rep. Jody Hice (R-Ga.), wrote in a letter to Pelosi. “Will you commit to supporting your July 2021 statement with definitive action to stand up to this blatant overreach President Biden is enacting? His move transcends the policies surrounding student loans. This is an illegal act by a President desperate for a political win.”

Naveen Athrappully contributed to the report.