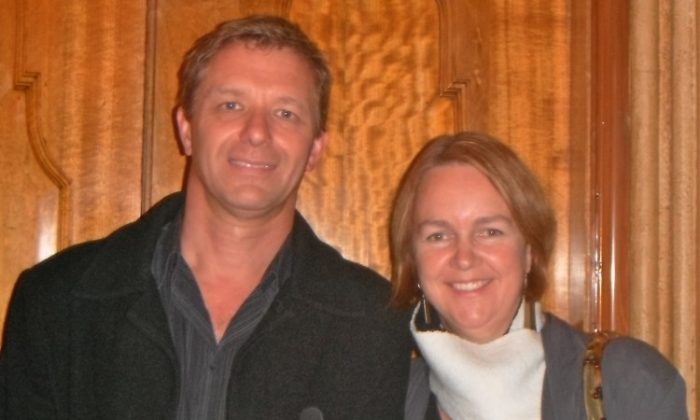 Mrs. Kernohan didn’t know what she was about to see: “I had no idea and I just saw the posters of the show and was drawn to it. I thoroughly enjoyed it. Some of the dances I felt inspired by, some of them, I felt a tingling sensation … about the story that went with it. Each story was so different and very exciting.”

Mr. Kernohan agreed saying: “I was impressed by the choreography and how they were able to tell a story through dance and just the athleticism of the dancers. To do some of the tricks that they [male dancers] did particularly the back flips—were very impressive.”

He also found the mix of Chinese instruments in a Western orchestra to be interesting and a new experience.

They were also interested and surprised to hear that this show cannot be seen in mainland China.
“I just assumed that what we were seeing everybody over there [in China] could see as well,” said Mrs. Kernohan.

Mr. Kernohan also remarked: “It was interesting to hear about the repression that still goes on in China. I travel to China and I wasn’t aware of the repression of certain religious beliefs.” He also added “It’s an interesting way of how to get an idea about some of the culture from China. A very athletic and very engaging way of showing it.”

Mrs. Kernohan also commented on how she enjoyed seeing the dancers on stage integrate with the backdrops so that they actually appear on screen: “I thought that was beautifully done.”

Animated, hi-tech backdrops are another feature of Shen Yun that “transport the audience to another world,” says the company.

She concluded by saying: “The costumes were flowing and inspiring. And I thought the athleticism and the way they jumped and rolled and were light on their feet, it was just amazing. That would also be something that I would tell people.”