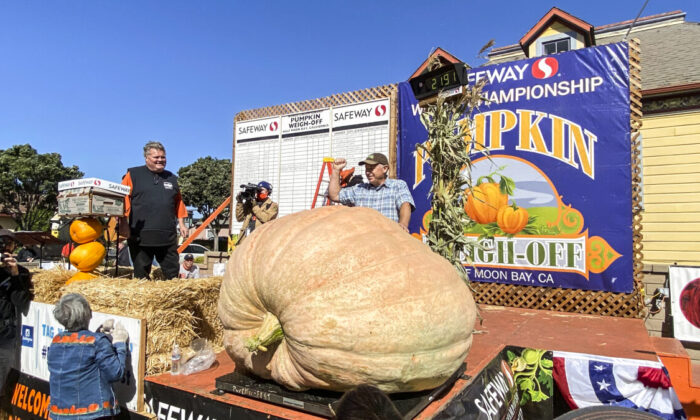 The winner of this year’s championship was Jeff Uhlmeyer from Olympia, Washington. His pumpkin weighed 2,191 pounds.

“It’s the granddaddy of competitions, in my opinion, in Half Moon Bay,” Uhlmeyer told NTD Television. “And I just enjoy coming here. … The crowd’s amazing. Just a really supportive crowd. And the growers are really gracious and friendly. We all support each other. Everybody wants to win, of course, but everybody’s happy for the champion.”

He has been growing pumpkins since 2009. It’s his first time winning in Half Moon Bay.

Last year, due to the pandemic, the event was not open to the public. This year, spectators were welcomed.

Leonardo Urena, a two-time champion, won second place this year with a 2,007-pounder. He’s satisfied with the results and plans to do better next year.

“My wife is one of the ones [who are] always supporting me,” Urena told NTD Television. “I was growing too many last year, I was growing six, and she’s like, you better listen to me. Plant less pumpkins and then you’ll do better. And then I’m going to follow her advice, because I think listening to [my] wife, it’s important.”

They said that a lot of work goes into getting the pumpkins to be that size.

“You start in April, and you do a lot of plant maintenance and tending your plants … taking care of issues and problems, and getting the right fertilizers and soil management. There’s all kinds of things … dealing with the environment, with the unknown,” Uhlmeyer said.

“We try to improve every year,” Urena said. “Get the best seeds in the ground, the best genetics you can get, because sometimes the pumpkins are big, but sometimes they’re light. And we want them to have both.”

Urena will take his pumpkin back for display at the winery where he works. After Thanksgiving, he will harvest the seeds and distribute them to other growers.

Uhlmeyer isn’t sure what to do with his giant gourd yet, but he will leave it for the event coordinators for now.

The first-place prize money has been increased to $9 per pound. Before, it was $7 per pound. If a pumpkin breaks the world record, the owner takes home $30,000.

The award for the most beautiful pumpkin went to Eric Carlson from Portola Valley, California, who took home $1,000.

Last year’s champion was Travis Gienger with the 2,350-pound “Tiger King” from Minnesota. After he took it home, he carved it into a tiger for the Halloween Parade in Anoka, which is known as the Halloween Capital of the World.

Gienger told The Epoch Times via email that he did not participate in the weigh-off this year because the seeds he chose “didn’t produce like they should have.” Next time, he intends to grow his own, which normally produce 2,000-pounders.