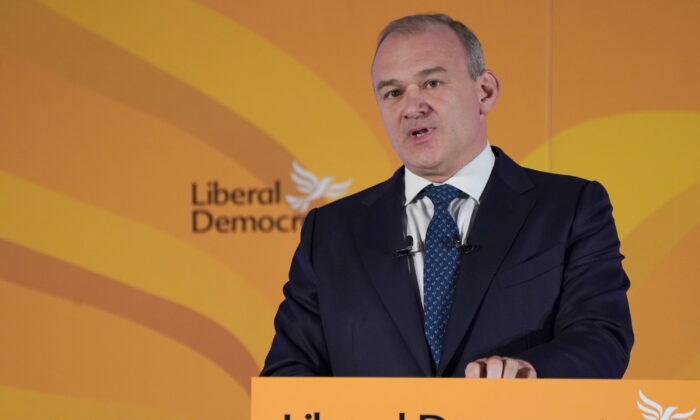 A total of 217 police stations and counters in England and Wales have closed between 2015 and 2021, according to figures obtained by the Liberal Democrats under the Freedom of Information Act.

According to the party, London and the South East, in particular, have seen a “staggering fall” in numbers, with Thames Valley Police closing the most sites—23 stations and 44 counters.

Calling on voters to choose the Lib Dems in the upcoming 2022 UK local elections on May 5, party leader Sir Ed Davey said the “shuttered police stations have become a symbol of the Conservatives’ failure on crime.”

“Too many people feel unsafe on their own streets, and too many criminals are getting away with it,” Davey said, adding that the Lib Dems are “calling for a return to proper community policing, where officers are visible, trusted, and focused on cutting crime.”

“This May people will have a chance to send [Prime Minister] Boris Johnson’s Conservatives a message. A vote for the Liberal Democrats is a vote for more investment in our police and youth services to help make our communities safer,” Davey said.

Ahead of the local elections, the Lib Dems are promoting a three-point plan to crack down on crime and anti-social behaviour.

This would involve restoring “proper community policing,” where officers are more visible, trusted, and known personally to local people; and reversing cuts to youth services by investing an extra £500 million ($630 million) a year through a ring-fenced fund to local authorities, it said.

The party also wants to scrap police and crime commissioners and invest what it says will equate to £50 million ($63 million) in savings in frontline policing and solving crimes.

A spokesperson for the Home Office said the government is “already over halfway” to its 20,000-officer recruitment target, and that “the police are being given the powers, tools, and funding they need to cut crime.”

“It is the responsibility of locally elected police and crime commissioners and chief constables to take decisions around their resourcing and estates,” the spokesperson said.

“However, police stations—which remain one of many methods where incidents can be reported—should be kept open where possible to ensure people feel safe in their communities.”