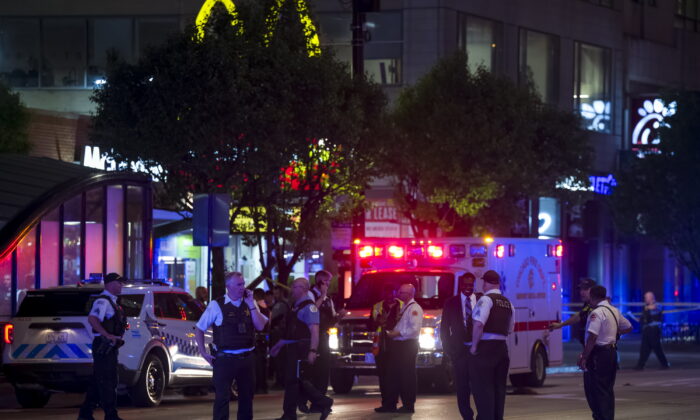 Chicago police work at the scene of a shooting near East Chicago Avenue and North State Street in the Near North Side neighborhood in Chicago on May 19, 2022. (Tyler Pasciak LaRiviere/Chicago Sun-Times via AP)
Crime and Incidents

At least 21 people were shot, including four fatally, across Chicago from Friday to Sunday morning, officials confirmed.

In one mass shooting incident, five people were seriously wounded after a fight broke out early Sunday morning in the Lawndale neighborhood on Chicago’s West Side. Five people aged 16 to 33 were on a sidewalk on South Karlov Avenue at around 1:30 a.m. when a fight broke out and a shooting ensued, police told local media outlets.

In another part of Chicago, a man whose age is not known was shot and killed in Englewood on the South Side. Officials said he was on a sidewalk on South Carpenter Street when someone shot him in the head and body, according to local media reports.

On Saturday, two males were killed after they opened fire in Englewood at around 5 p.m. on South Bishop Street, police said. After they shot each other, both males were transported to the University of Chicago Medical Center, where they were pronounced dead. One of the shooters was identified as 29-year-old Derrick Washington, authorities said.

Another person was shot and killed on the South Side on Saturday at around 1:30 p.m. on West 63rd Street, according to police. The man’s age and identity were not provided, and no suspect has been taken into custody, police said.

Last weekend, one person was killed and another 26 were wounded in shootings across Chicago, which has among the strictest gun control laws in the United States. In 2022, there have been 899 shooting incidents, according to Chicago Police Department data.

Earlier this month, Chicago Mayor Lori Lightfoot said that in response to recent shootings, “I’m not gonna rest, and I know the superintendent and the entire department shares my resolve that we’ve got to do more to give people confidence and make them feel safe because they are safe,” according to local media.