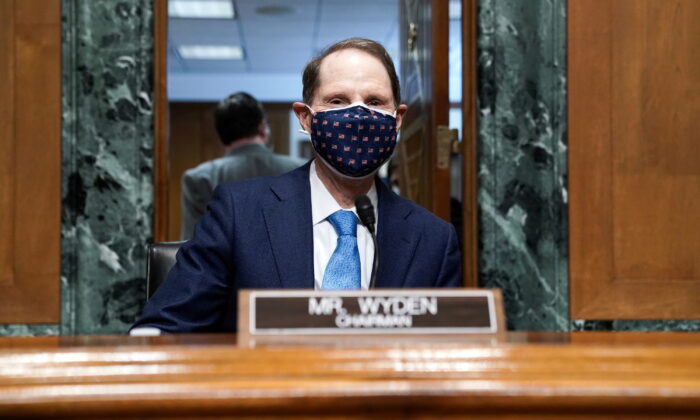 Twenty-one Senate Democrats urged the White House to place recurring stimulus payments and an extension in federal unemployment aid in its next infrastructure plan.

In a letter, the Democrat lawmakers—led by Finance Committee Chairman Ron Wyden (D-Ore.)—wrote that the “crisis is far from over” and said that Americans “should not be at the mercy of constantly-shifting legislative timelines and ad hoc solutions.”

This month, Congress hashed out a deal to pass a $1.9 trillion stimulus package that, in part, distributed $1,400 stimulus payments to eligible Americans and households. Those payments started going out several weeks ago.

But Wyden and 20 other senators said that the $1,400 checks will only suffice for a few months.

“We urge you to include recurring direct payments and automatic unemployment insurance extensions tied to economic conditions in your Build Back Better long-term economic plan,” the Democrat senators added in their letter Tuesday to President Joe Biden.

“While we are pleased that the American Rescue Plan included a one-time direct payment and an extension of federal unemployment insurance programs, a single direct payment will not last long for most families,” they added.

The senators said more stimulus checks are needed because millions of people who don’t qualify for unemployment benefits after their work hours were cut in the midst of the pandemic, had to switch to other jobs, or had to leave the workforce entirely.

“Recurring direct payments have wide support from both the general public and economic experts,” they claimed.

Meanwhile, the Democrats said that the expanded federal unemployment payments will run out starting September.

“We are worried about the cliff facing unemployed workers when the unemployment insurance extensions expire on September 6,” the letter reads.

Biden is slated to unveil details of the infrastructure package on Wednesday in Pittsburgh. The measure could reportedly include $3 trillion to $4 trillion in new spending.

Three stimulus checks have already been sent out to Americans as part of several COVID-19 stimulus efforts, including $1,200 and $600 payments under the Trump administration and the latest round.

While few Republican lawmakers have criticized the stimulus checks, many have criticized lockdown orders that were handed down across most states during the pandemic, saying they triggered the current uptick in unemployment. In recent days, the governors of Texas, Mississippi, and several other states moved to roll back mask mandates and allow businesses to reopen.