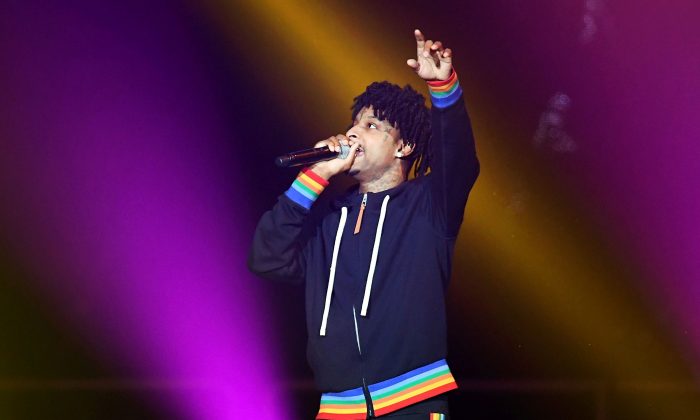 A co-manager for rapper 21 Savage, who was arrested by Immigration and Customs Enforcement (ICE) officers in Atlanta on Feb. 3, said that the rapper is in good spirits despite allegedly harsh conditions.

“Just got off phone with Savage,” wrote Stone Mound Meezy on Twitter in a tweet that he later deleted. “He is in lockdown for 23 hours of the day, no TV or any communication besides our 10-minute phone calls.”

“Everything I’ve told him that has been happening made him happy and makes this time fly by. Thank y’all for the support,” he added.

Meezy also claimed that he grew up with Savage and that he was in the same third-grade class as the rapper at Stone Mountain Elementary School in Georgia.

Imma say this 1 time … Savage did not come to amaerica as a teen lol… me and him had the same 3rd grade homeroom teacher … shouts to Ms. Scott ..Stone Mountain elementary

ICE said that the rapper, whose real name is Shayaabin Abraham-Joseph, is a resident of the United Kingdom and is illegally present in the United States, CNN reported on Feb. 3.

The agency said he legally entered the United States in 2005 when he was minor, but he failed to depart the country under the terms of his visa.

After his visa expired in July 2006, his presence in the United States became unlawful, ICE said. Abraham-Joseph was also convicted on felony drug charges in 2014 in Georgia, ICE said.

“Mr. Abraham-Joseph is presently in ICE custody in Georgia and has been placed into removal proceedings before the federal immigration courts,” the agency said in a statement about the matter.

The agency said his case will now be heard by a federal immigration judge to determine the next move.

Attorney’s for the rapper claimed that ICE was trying to intimidate 21 Savage.

“This is a civil law violation, and the continued detention of Mr. Abraham-Joseph serves no other purpose than to unnecessarily punish him and try to intimidate him into giving up his right to fight to remain in the United States,” attorney Charles Kuck said in a statement sent to news outlets.

“He rose above the difficult circumstances of his youth to achieve success and make contributions to our society that rival any of those by a natural born citizen.”

Kuck admitted that 21 Savage’s family overstayed their visas after bringing him to the United States but said that wasn’t his fault. Kuck told entertainment blog TMZ that his client applied for a U-Visa in 2017 and that the application is pending. He said that the application was based on the rapper being a victim of a 2013 shooting where his best friend was murdered.

He has represented himself as born and raised in Atlanta, making it a shock when the arrest revealed that he was actually born in the United Kingdom.

“It seems so outlandish that the prototypical Atlanta rapper is not from Atlanta,” Samuel Hine, a writer and editor at GQ who researched 21 Savage and spent a day with him for a profile in the magazine last year, told The Associated Press. “I think that’s why so many people were sort of making fun of him, and making memes.”

“Him growing up in Atlanta is a pretty fundamental part of his story. His identity is so rooted in his Atlanta sound, his Atlanta crew,” Hine added. “I certainly heard no whispers challenging his accepted backstory.”

According to the writer, 21 Savage was truthful about his stories about growing up but he left out what came before that.

Singer Demi Lovato was among those weighing in on the shocking revelation, saying on Twitter on Sunday night: “So far 21 Savage memes have been my favorite part of the Super Bowl.”

Amid backlash, she said her tweet referred to memes about 21 Savage being a British citizen and not the threat of him getting deported. She also slammed people who brought up her drug issues and deactivated her account.

Before she did, she sent a final missive, saying: “This is why I don’t tweet anymore. If you’re gonna come at me for making a joke, try coming at me with something original not involving drugs.”