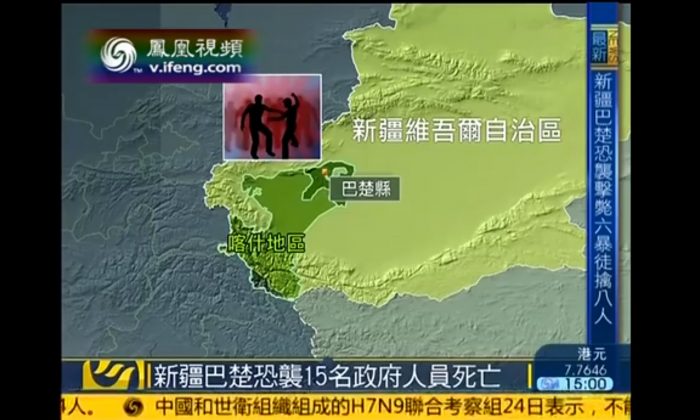 A screenshot of a news report on the incident from Phoenix Television, a Hong Kong broadcaster. (Screenshot via The Epoch Times)
China

At least 21 people died Tuesday during a showdown in Xinjiang Province between Uyghur muslims and Chinese police, which communist authorities are calling a “terrorist attack.”

The incident took place in Selibuya Town, Maralbishi. According to the local propaganda office, three “community workers” were checking in on residents when they came across a group of people with knives.

State reports said that the community workers, which are affiliated with the local authorities, were conducting what is termed “zou fang.” The phrase refers to check-ins on the houses of residents: In official propaganda, the visits are supposed to demonstrate the regime’s “love of the people,” but in this case they appear to have had the opposite effect.

The community workers called their superiors, but were apparently then beset by 14 Uyghur “rioters” in the house, who reportedly set the building on fire. When the police arrived, shots were fired, with a total of 15 police and community workers reportedly killed, along with 6 Uyghurs. The other 8 Uyghurs were detained.

Online news about the violence was strictly censored in the mainland, and the words “Selibuya Maralbishi” were blocked on Sina Weibo. Many netizens questioned the state account, asking why the community workers went to the residents’ home in the first place.

Dilxat Raxit, spokesperson for the exiled World Uyghur Congress, said the violence was sparked by Chinese armed personnel, who killed a young Uyghur as part of a cleanup campaign by the regime.

“The information that we’ve received is that from last night till this morning, the authorities have flooded the streets with armed men,” Dilxat Raxit told Reuters by telephone from Sweden the next day.

“After the incident, the locals’ mobile phone and internet connections were cut off. Today it has recovered slightly, though not completely.”

A local using the alias Ms. He Yuan told The Epoch Times that the incident took place near the restaurant where she works. She said many armed police arrived, and told locals that martial law was being enforced. No vehicles were allowed to pass through until the afternoon, and all shops owned by Han Chinese remained closed.

“My father has lived in Xinjiang for over 30 years,” Ms. He said. “We’ve never experienced something big like this. We don’t know what’s going on in recent years.”
The Epoch Times tried to telephone the police station to find out more details, but a recorded message said the number did not exist.

Nearly half of the province’s population are Uyghurs. Ethnic and racial tensions in the area have been running high in the last few years. During the 2009 riots between Uyghurs and Han in the capital of Urumqi, nearly 200 people were killed, mostly Han, according to official reports.

However, Uyghurs in the area say Chinese security forces began a brutal crackdown, and Han sought revenge on the streets. The BBC’s Beijing correspondent Celia Hatton noted that foreign reporters’ experience of the riots was mixed.

“Some reporters were able to speak to a variety of people on the ground, while others faced harassment and intimidation,” she wrote in her analysis of the situation, adding that “the ability to dig out the truth” is no easier for Chinese journalists.