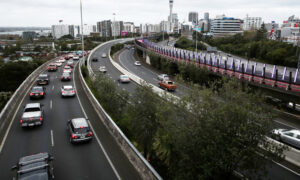 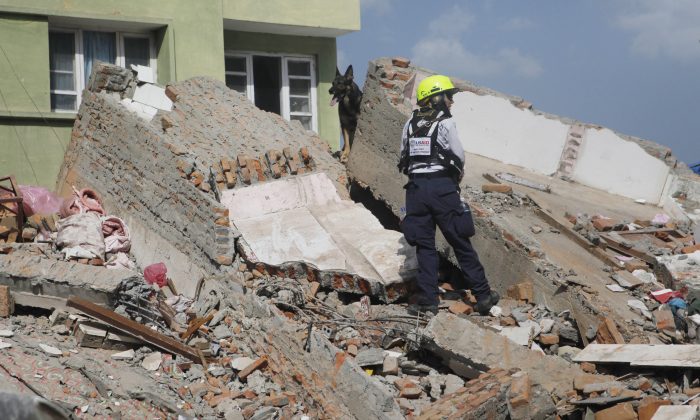 A rescue worker from USAID along with a sniffer dog looks for survivors at the site of a building that collapsed in an earthquake in Kathmandu, Nepal, Tuesday, May 12, 2015. A major earthquake has hit Nepal near the Chinese border between the capital of Kathmandu and Mount Everest less than three weeks after the country was devastated by a quake. (AP Photo/Niranjan Shrestha)
Asia & Pacific

KATHMANDU, Nepal— A landslide triggered by heavy rainfall buried at least 21 people and left dozens missing as they were sleeping at night in six villages in Nepal’s mountainous northeast, officials said Thursday.

Rescuers dug out the bodies and searched the rubble for survivors in Taplejung district, about 500 kilometers (310 miles) east of the capital, Kathmandu, said police official Shanti Raj.

At least 24 people are missing but the number could be higher, he said.

The weather improved, allowing a rescue helicopter to reach the area and evacuate eight injured people.

The nearest town is at least five hours’ away on foot when the weather is good, but getting to the site was taking much longer for rescuers on Thursday because of rains and fog, said Home Ministry official Laxmi Dhakal in Kathmandu.

There are no government offices or police stations in the area.

Landslides are common in mountainous Nepal during the rainy monsoon season, which began in June and ends in September.

The Himalayan nation is still recovering from earthquakes in April and May that killed more than 8,700 people and caused massive damage, with many of the roads cut off by landslides.

Meanwhile, the government announced Thursday it would hire international experts to study trekking routes in the mountains of Nepal to see if they are safe for hikers to return.

Nineteen people were killed and scores injured in an avalanche at Mount Everest base camp triggered by the April 25 quake. Also, the trails around the Langtang valley in northern Nepal were completely damaged and an entire village buried by a landslide and avalanche set off by the earthquake.

Tens of thousands of foreigners come to Nepal every year to trek on the foothills of the Himalayan peaks. The next trekking season starts in September.