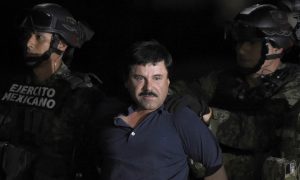 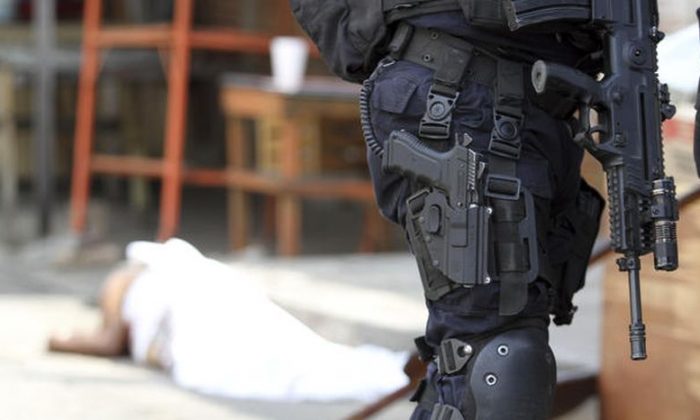 Police guard the scene of a murder after a man was shot to death in Acapulco, Mexico, in this Jan. 2, 2019 file photo (The Associated Press)
Americas

At least 21 dead bodies were found in northern Mexico after a gang clash, said officials on Jan. 10

Mexican authorities said the bodies were located in the northern Mexico border state of Tamaulipas, according to The Associated Press.

The bodies were found in seven burned-out vehicles amid a clash between drug gangs on the border town of Miguel Aleman.

Miguel Aleman is located about 50 miles from the U.S. border town where President Donald Trump will visit as he tries to bolster support for his plan to build a border wall. Trump is slated to visit McAllen, Texas, on the U.S.-Mexico border.

According to video footage from Fox News, Air Force One landed at the McAllen-Miller International Airport in McAllen. There, Trump will partake in a meeting to discuss immigration and border security.

President Andres Manuel Lopez Obrador said the killings appear to have been a “battle between two groups,” but he offered scant details on the incident, Reuters reported. Security officials are investigating and will provide more information later.

A Mexican security official told Reuters that authorities discovered the bodies on Wednesday, 17 of them burned, outside Ciudad Miguel Aleman, which is about 50 miles from McAllen, across the Rio Grande.

Tamaulipas has become one of the most violent states in Mexico, a result of gangs fighting to control drug trafficking, extortion rackets, and the exploitation of migrants.

The drug war left 28,689 people dead in Mexico in 2017, according to statistics from the Mexican government. That figure was the highest ever recorded in a year, AP noted.

Tens of thousands of people have been killed in Mexico in previous years amid fighting between security forces and warring drug cartels.

On Jan. 9, meanwhile, Trump said he met with top Democrats over border security but left the meeting early, saying it was a “total waste of time.”

Trump wrote on Twitter after the meeting: “Just left a meeting with Chuck and Nancy, a total waste of time. I asked what is going to happen in 30 days if I quickly open things up, are you going to approve Border Security which includes a Wall or Steel Barrier? Nancy said, NO. I said bye-bye, nothing else works!”

Vice President Mike Pence said the administration presented several plans and offers during the negotiations. Democrats, he said, would not support the wall.

“I can give you 15 speeches [Schumer] gave, in which he talked about border security,” Trump said prior to the meeting. “The only reason they’re against it is because I won the presidency.”