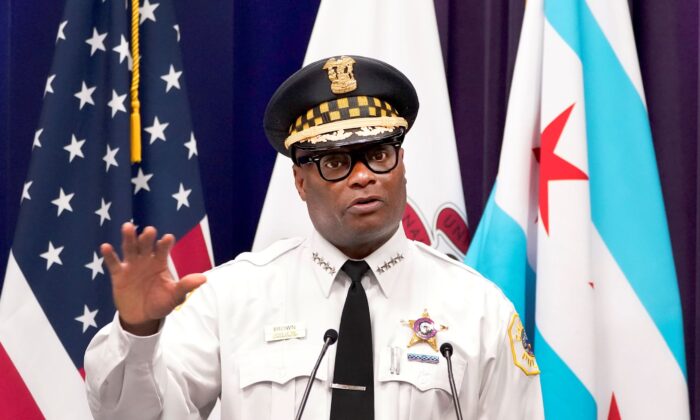 Twenty-one officers with the Chicago Police Department have been placed on no-pay leave for refusing to disclose their COVID-19 vaccination status, as required by a city mandate, according to an official.

Chicago Police Superintendent David O. Brown confirmed the figure during a press conference on Tuesday, a day after Mayor Lori Lightfoot said that a “very small number” of officers had been put on no-pay status for refusing to comply with the mandate after being given several opportunities to do so.

Brown told reporters that 67.7 percent of the department’s 12,770 employees had so far complied with a city requirement to report their COVID-19 vaccination status. The department has the lowest compliance rate with the city’s mandate of any city department, the Chicago Sun Times reported.

“This process has been obviously very emotional,” Brown said on Tuesday. “We have given them the time and given them the explanation as best we can on the serious nature of violating the vaccine mandate.”

Brown said that the 21 officers still have the option to disclose their COVID-19 vaccination status.

It comes after the head of the Chicago police officers union on Oct. 12 called on its members to refuse to comply with the city’s COVID-19 vaccine mandate, which took effect on Friday.

“Do not fill out the portal information,” Chicago Fraternal Order of Police President John Catanzara said in a video to officers posted on YouTube last week. “I’ve made my status very clear as far as the vaccine, but I do not believe the city has the authority to mandate that to anybody—let alone that information about your medical history.”

The police union head in his video instructed members to file for exemptions to receiving the COVID-19 vaccine but to not enter that information into the city’s vaccine portal. According to Catanzara, the police union is preparing a lawsuit against the city over the mandate.

“I can guarantee you that no-pay status will not last more than 30 days,” Catanzara added. “There’s no way they’re going to be able to sustain a police department workforce at 50 percent capacity or less for more than seven days without something budging.”

A judge ruled on Friday that Catanzara could no longer publicly push members to defy the mandate.

Separately on Sunday, the CPD sent a memo to officers warning that those who opt to retire rather than follow the mandate “may be denied retirement credentials,” the Chicago Tribune reported.

The Epoch Times has contacted Lightfoot’s office and the CPD for comment.