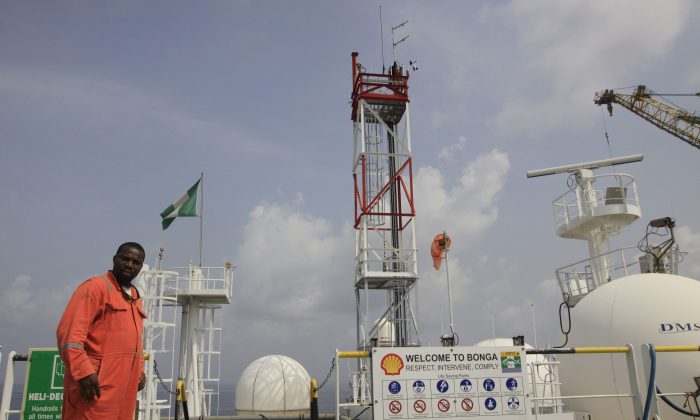 A member of Shell staff on the Bonga offshore oil Floating Production Storage and Offloading vessel off the coast of the Niger Delta in Nigeria no Dec. 26, 2011. (AP Photo/Sunday Alamba)
Business & Economy

Nigeria’s oil production already had reached a 20-year low of less than 1.6 million barrels a day from a projected 2.2 million, because of attacks on a Chevron platform last week and on a pipeline that forced Shell to declare force majeure on Bonny Light crude on Wednesday. The same day, Shell began evacuating workers from its offshore Bonga oilfield following a militant threat, though production there is continuing.

Shell’s Forcados export terminal has been shut since a February bombing.

Villagers said militants attacked a Chevron well on Marakaba pipeline on Thursday. They requested anonymity for fear of repercussions amid a massive deployment of troops that has led more than 10,000 people to flee the fallout. Chevron did not respond to requests for comment.

A new group, the Niger Delta Avengers, has claimed most attacks. They want natives of the oil-producing southern Niger Delta to get a bigger share of oil wealth and are angry about cuts to an amnesty program that paid militants to guard the installations they once attacked.

There are suggestions the violence is being fueled by some Christian politicians in the oil-producing south opposed to President Muhammadu Buhari, a northern Muslim. Eurasia Group risk assessment said the sophistication of attacks points to such a scenario and would indicate the Avenger group “poses a greater threat than its small numbers and scant grassroots support would indicate.”

The Nigerian production cuts have helped boost oil prices—to nearly $50 a barrel from under $30 a barrel in January—according to the International Energy Agency.