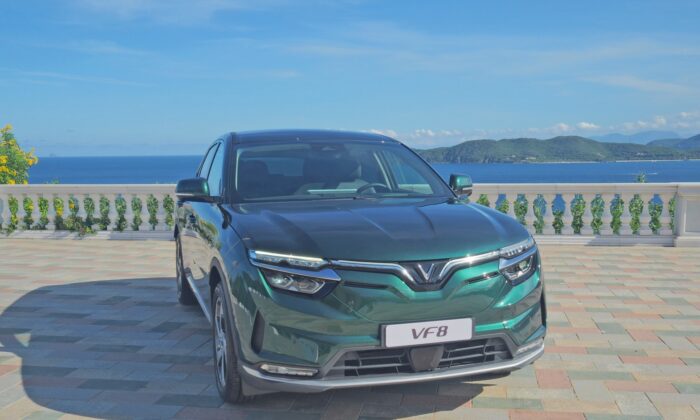 The newest player in the EV space that you probably haven’t heard of is VinFast, which was founded in Vietnam in 2017. But start-up isn’t exactly the right term – the automaker is a subsidiary of Vingroup, which is the largest private conglomerate in the Southeast Asian country. And Canadians will soon be able to see one of the brand’s crossovers up close and personal when the VF 8 arrives on our shores later this year – The Epoch Times had the opportunity to take a demo for a brief first drive last month on its home soil and here are some early thoughts.

The VF 8 debuted at the LA Auto Show last winter. Formerly called the VF e35, the vehicle has dropped the “e” and been renamed, following the sudden announcement a zero-emissions-only focus would be in place moving forward (the company started out producing internal combustion cars overseas). The mid-size electric SUV, roughly the same size as a Hyundai Santa Fe, boasts unique looks managing to stand out from the rest of the pack, thanks to a collaboration with Italian design firms Pininfarina and Torino Design.

Called “Dynamic Balance,” the style language is a mix of sharp and fluid bodylines providing a sporty, aerodynamic appearance. The front fascia is especially interesting featuring stacked headlamps and signature LED “wings” extending out from the centre V emblem that illuminate in a striking fashion at night time. A matching full-width light bar across the tailgate complements the setup. Wheels range from 19 to 21 inches in diameter, depending on grade.

Before going into detail about the two-row cabin, a disclaimer: the examples we sat in and tested in July were still pre-production so what we observed may not be exactly the same as the models destined for North America.

The interior is very much on trend and is dominated by a huge landscape-oriented 15.6-inch touchscreen. Immediately noticeable is the lack of any sort of instrument cluster ahead of the steering wheel. While a head-up display is standard, and driving information is relayed on the monitor, it does takes a little getting used to. As found in other competitors, there’s an onboard voice assistant capable of executing various commands when a user says, “Hey Vinfast” and then a request like, “lower the temperature” or, “change the radio station.”

I sat in the back and discovered a pleasant amount of legroom, despite a passenger joining me up front. However, because the crossover was originally conceived to include an ICE option, the floor had a rather annoying transmission hump in the middle.

The VF 8 is sold in two different dual-motor all-wheel drive flavours – a detuned entry-level Eco trim that we tested outputting 348 horsepower and 368 lb-ft of torque, as well as a more powerful Plus making 402 horsepower and 457 lb-ft of torque. Range on a full charge is approximately 420 kilometres and 400 kilometres, respectively (standard battery).

Media were allowed laps around a purpose-built test track at the VIngroup-owned Vinpearl Resort, located on an island off the Southeastern coast of Vietnam. Possessing a healthy mix of corners and straightaways, it provided a decent feel for performance. The estimated 0 to 100 km/h time is 5.9 seconds, but acceleration felt quite slow. Again, these were pre-production units and any sluggishness should easily be remedied via software.

In terms of the suspension, no specifics were provided. The SUV remained composed while turning at speed, due in part to the battery pack mounted beneath the load floor creating a low centre of gravity, and stopping power was adequate. In the settings menu, drivers can choose between low and standard brake regeneration force to feed some energy back into the system. Surprisingly, no one-pedal mode is available (yet?)

The initial batch of VF 8s will house the aforementioned 82-kilowatt lithium ion battery , to be joined shortly afterwards by an enhanced 87.7-kilowatt adding a few dozen kilometres to the total travel distance. What is quite interesting is in order to keep the cost of the vehicle lower, VInFast is introducing a subscription program where the owners lease the battery rather than buying it outright (although consumers are able to opt for the latter in 2024).

There are essentially two monthly plans: a $139 fixed allowing unlimited mileage, and a $39 flexible with a 500 kilometre limit and $0.09/km thereafter. The cost of any repairs, maintenance and even replacement – if charging capacity drops below 70 per cent – is covered.

The base crossover starts at $50,850 CAD ($59,350 for the Plus) and includes a 10-year bumper-to-bumper warranty. Reservations are now being accepted online, or prospective buyers can visit one of the storefronts currently open in B.C. and Ontario. A total of 38 are expected to open across Canada over the next 16 months. A bigger three-row VF 9 flagship is also coming, priced at $69,150 (Eco) and $75,250 (Plus).

The VinFast name is an acronym of sorts combining the Vietnamese words for Vietnam style, safety, creativity and innovation. As alluded to above the manufacturer is part of parent Vingroup founded in 1993 by entrepreneur Pham Nhat Vuong, who, after studying in Russia, made his fortune creating a wildly success instant noodle empire in Ukraine before returning to his native country.

In the early 2000s the now-billionaire expanded into real estate, tourism, healthcare, tech and education, among other sectors, which guests experienced firsthand staying at its hotels and visiting the sprawling VinUniversity campus in Hanoi where VinGroup is headquartered. VinFast started out selling cars, e-scooters and electric busses domestically before turning attention to the global market in 2021.

Vehicles are built at a massive facility in Haiphong, to the east of Hanoi, though a multi-billion dollar factory is in the works for Chatham County, North Carolina. The state has kicked in $1.2 billion, the most sizable such economic incentive package to date, and the project is set to break ground in the fall.