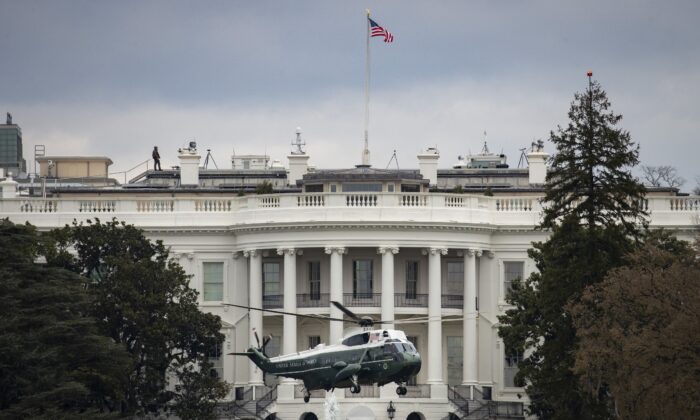 Marine One, with President Donald Trump onboard, departs the South Lawn of the White House, on March 22, 2019. (Drew Angerer/Getty Images)
2020 Election

Four candidates vying for the White House in 2020 have released the results of their fundraising efforts for the fourth quarter of 2019.

At the time of reporting, no other candidates had declared their fourth-quarter intake. The Wall Street Journal reported that, in the final three months of 2019, Joe Biden’s campaign expected to raise more than $22 million, while Elizabeth Warren anticipated collecting $17 million.

All presidential campaigns are required by law to report the results of their final 2019 fundraising efforts to the FEC by Jan. 31.

A snapshot of the fundraising efforts of the presidential contenders shows the 2020 election is poised to be the most expensive on record.

All the Oval Office candidates, including incumbent President Donald Trump, have raised a total of around $775.6 million so far in their campaigns.

This calculation is based on data from the Federal Elections Commission (FEC), which has published fundraising figures (amounting to $653.9 million) that don’t include the fourth-quarter filings, to which the $121.7 million in total Q4 receipts declared by the four campaigns have been added.

Trump, who filed to run for reelection the night of his 2017 inauguration, has amassed an unprecedented war chest in his bid to extend his tenure for another four years.

A senior campaign official said on Jan. 2 that Trump’s reelection campaign raised $46 million in the fourth quarter of 2019, a major haul that was boosted by a surge of donations in the wake of the Democrats’ impeachment bid.

“Democrats and the media have been in a sham impeachment frenzy and the president’s campaign only got bigger and stronger with our best fundraising quarter this cycle,” said Trump’s campaign manager, Brad Parscale, in a statement.

The Trump campaign’s official FEC filings, which don’t include the Q4 intake, show that Trump has raised a total of $165.3 million since 2017, which together with the $46 million brings his total to $211.3 million. The commission figures show that the Trump campaign has so far spent $89.7 million.

“The President’s campaign ended the calendar year with a whopping $102.7 million in cash on hand,” the campaign said in a statement. It added that the $46 million was the amount raised only by the Trump reelection campaign and doesn’t include fundraising by the Republican National Committee (RNC). In the third quarter, Trump and the RNC had together raised $125 million.

The $102.7 million in cash on hand exceeds the $81.8 million the campaign of Democratic President Barack Obama had when he began his reelection year at the end of 2011, a Trump campaign official said.

Trump’s strong quarter “is testament to his wide grassroots support and his stellar record of achievement on behalf of the American people,” Parscale said in a statement.

Sanders raised more than $34.5 million in the last quarter of 2019, his presidential campaign stated on Jan. 2, the largest three-month haul of any Democrat so far in the 2020 contest.

FEC figures, which don’t take into account fourth-quarter funds, show Sanders has raised a total of $74.5 million since launching his bid for office. Together with the $34.5 million Sanders’s campaign said he amassed in the last three months of 2019, his total donations amount to $109 million. The FEC figures show that Sanders’s campaign has so far spent $46.2 million.

Sanders has built his campaign on small donations, largely through online fundraising from an ethnically diverse and mostly young coalition of supporters.

Campaign manager Faiz Shakir told Reuters that Sanders’s “grassroots movement” showed he was he best placed among the Democratic hopefuls to topple Trump and take the White House.

“He is proving each and every day that working-class Americans are ready and willing to fully fund a campaign that stands up for them and takes on the biggest corporations and the wealthy,” Shakir said in a statement.

For the presidential race, the 78-year-old is fighting to stand out in a field of progressives running on issues he brought into the Democratic Party mainstream four years ago.

Sanders is now polling in second place, with 19.1 percent support in aggregate, according to RealClearPolitics.

Buttigieg, the former mayor of South Bend, Indiana, raised $24.7 million in the fourth quarter. For Buttigieg—who is polling behind Biden, Sanders, and Warren—this intake represents an increase on previous periods.

FEC figures, which don’t take into account fourth-quarter funds, show Buttigieg has raised a total of $51.6 million since he launched his campaign. Together with the $24.7 million Buttigieg’s campaign stated he had collected in 2019 Q4, his total donations amount to $76.3 million. The FEC figures show that this candidate’s campaign has so far spent $28.2 million.

A Harvard University graduate and Rhodes scholar, Buttigieg served in Afghanistan with the Navy reserve. He emerged from virtual anonymity to become one of the Democratic Party’s brighter stars, building momentum with young voters.

Buttigieg is currently polling in fourth place, with 8.3 percent support in aggregate, according to RealClearPolitics.

Yang raised more than $16.5 million during the fourth quarter of 2019, according to his campaign. This intake represents $6.5 million more than his previous $10 million record set in the third quarter.

“At every turn in this race, Andrew Yang continues to exceed expectations, whether it’s in terms of grassroots fundraising, making the debates, early state polling, or the ability to draw big crowds,” said campaign chief Nick Ryan.

“What we have achieved together to date through the humanity first values of this campaign, now sets us up to compete through the early-state primaries, Super Tuesday, and beyond.”

FEC figures, which don’t take into account fourth-quarter receipts, show Yang has raised a total of $15.2 million since launching his bid for office. Together with the $16.5 million Yang’s campaign stated he had collected in the last three months of 2019, his total donations amount to $31.7 million. The FEC figures show that Yang’s campaign has so far spent $8.8 million.

The New York entrepreneur and former tech executive is focusing his campaign on an ambitious universal basic income plan, which would guarantee all Americans over the age of 18 a $1,000 check every month.

His campaign has released more than 100 policy ideas, including eclectic proposals such as creating an infrastructure force called the Legion of Builders and Destroyers.

Yang is currently polling in seventh place, with 3.5 percent support in aggregate, according to RealClearPolitics.

Biden, who, according to a RealClearPolitics poll compilation, leads the Democratic field with 28.3 percent support, hasn’t declared his Q4 intake. However, The Wall Street Journal cited a campaign email with expectations that the former vice president would at least match his Q2 fundraising of $22 million.

FEC figures, which don’t take into account fourth-quarter receipts, show Biden has raised a total of $37.8 million since launching his bid for office. Together with the $22 million Biden’s campaign expects he will have collected in the last three months of 2019, his total donations would amount to $59.8 million. The FEC figures show that his campaign has so far spent $27.8 million.

Biden stands at the center of the Democratic debate over whether the party’s standard-bearer should be a veteran politician or a newcomer, and whether a liberal or a moderate has a better chance of defeating Trump.

Like Biden, Warren hasn’t yet declared her Q4 intake. The Wall Street Journal cited a campaign email indicating that the Massachusetts senator had raised $17 million in the final quarter of the year. This is a weaker showing compared to her Q3 receipts, which amounted to $24.6 million.

FEC figures, which don’t take into account the fourth-quarter receipts, show Warren has raised a total of $60.3 million since launching her bid for office. Together with the $17 million Warren’s campaign expects she will have collected in the last three months of 2019, her total receipts would amount to $77.3 million. The FEC figures show that her campaign has so far spent $34.6 million.

The 70-year-old U.S. senator from Massachusetts is a leader of the party’s progressive wing and a fierce critic of Wall Street. She has focused her presidential campaign on a populist anti-corruption message, promising to fight what she calls a rigged system that favors the wealthy.

She has released an array of policy proposals on everything from breaking up big tech companies to implementing a “wealth tax” on the richest Americans.

Warren is currently polling in third place, with 15.1 percent support in aggregate, according to RealClearPolitics.

The fundraising receipts and spending figures for most of the remaining candidates are found in the tables below, as per FEC data. The numbers exclude 2019 Q4.

*This article has been corrected to indicate that under Andrew Yang’s universal basic income proposal, every adult over 18 would receive the entitlement, which would not cut off at 64, but stack with Social Security. Also, a correction has been made to the ticks on the x-axis of the chart showing Bernie Sander’s receipts and spendings.