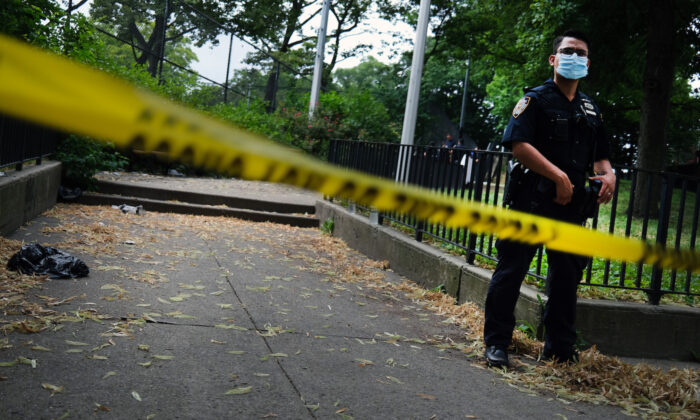 A police officer stands near the scene of an afternoon shooting that left one person dead in the Brooklyn borough of New York on July 7, 2020. (Spencer Platt/Getty Images)
Crime and Incidents

New research has found that the 2020 homicide surge was weaker in Republican-voting counties, not linked to gun sale increases or COVID-19, and higher among black Americans, adding to a deeply contentious debate over the violence that shook the United States that year.

“Some people were claiming there was not a spike or that it is in Republican states, and others were claiming it just had to do with COVID,” Christos Makridis, a fellow at the conservative Manhattan Institute and lead author of the new analysis, said in an email interview with The Epoch Times.

The year 2020 was marked by the death of George Floyd and associated protests and riots.

“Covid-19 deaths are slightly negatively correlated with the number of homicides but not statistically related to the homicide growth rate, which underscores that the rise in crime cannot be explained by Covid-19,” Makridis and his co-author, Manhattan Institute fellow Robert VerBruggen, wrote in their May 18 issue brief.

According to the Manhattan Institute brief, the rate at which black Americans died by homicide, already far higher than the rates among Hispanic Americans, white Americans, and Asian Americans, increased by 34 percent, greater than a 19 percent increase among white Americans.

“American homicide is overwhelmingly intraracial,” the authors wrote—in other words, it typically involves perpetrators and victims of the same race.

The authors found that homicides were far less common in counties with a higher Republican share of the vote in 2016. What’s more, the homicide growth rate between 2019 and 2020 was also lower in those counties.

“Although we need more data to say definitively, we find some evidence that suggests that the nation’s political cultures played a role, with homicide increases in GOP-leaning counties tending to be smaller than those in Democratic-leaning counties when we focus on homicides within counties over time,” the authors wrote.

This sets their work apart from a March report by the center-left Third Way think tank, “The Red State Murder Problem.”

Third Way found that homicide rates were significantly higher in states that supported Trump in 2020.

Yet, John Lott, an economist who served in the Department of Justice under Trump, took issue with Third Way’s reliance on data at the scale of individual states rather than more granular information.

“State-level data is not very useful. States have both urban and rural areas—and policing is a local decision in cities, which tend to be Democratically controlled even in Republican states,” Lott told The Epoch Times.

He cited the discretion afforded to local district attorneys (DAs) when it comes to prosecution and bail. DAs funded by left-wing billionaire George Soros, including Kim Foxx in Chicago and Chesa Boudin in San Francisco, have been faulted by opponents for rising rates of property crime and violent crime, along with creating an atmosphere of overt hostility directed at law enforcement.

“Is it easier to put together data on states than it is to get the county-level data? Yeah, sure, it’s a little easier. But to me, it just shows kind of a level of laziness in terms of work,” Lott said.

Explaining his choice of data, Kessler told The Epoch Times that he and his co-author “used all local sources,” including “state crime data from state reports and where that was not available, local newspaper sources.”

He pointed out that 2019 and 2020 were marked by a surge in gun ownership, as indicated by an increase in gun background checks.

“It’s hard not to attribute high murder rates with high gun ownership since nearly 80 percent of all homicides are with guns,” Kessler told The Epoch Times.

Yet, Lott pointed out that gun crimes actually dropped by a significant amount, according to the FBI’s Uniform Crime Report.

Data from the National Crime Victimization Survey, which is meant to bridge any gap between crimes reported to police and crimes that go unreported, show a similar 27 percent drop.

While scholarship on homicide often uses FBI data, the Manhattan Institute’s issue brief instead relied on data supplied by the Centers for Disease Control and Prevention (CDC).

The authors explained this choice by arguing that the CDC’s numbers are far more comprehensive than what the FBI provides, although with the caveat that the CDC statistics include gun accidents and some other non-homicides.

Both FBI and CDC data show a similar uptick in homicides during 2020.

Lott noted that CDC data doesn’t provide the level of detail on firearm crime that he emphasized to The Epoch Times.

Kessler said he had found CDC data incomplete in the course of conducting his own research.

He also questioned the Manhattan Institute’s exclusion of counties with fewer than 10 homicides. The report attributed those exclusions to “privacy reasons.”

“What is so wrong about those counties? For example, I recall that South Dakota had the biggest jump in murders as a percentage between 2019 and 2020. Are any South Dakota counties in the Manhattan Institute report? Our report counted every single homicide,” Kessler said.

Makridis confirmed that the county-level analysis didn’t include any counties in South Dakota.

He said his analysis had been replicated at the state level, suggesting that the omission of particular counties wasn’t an issue.

Notably, the Manhattan Institute report’s map of state-level increases in the homicide death rate also appears to show South Dakota near the top of the heap, alongside Kentucky, Delaware, New York state, Montana, Idaho, and Connecticut.

“I would have included things like changes in arrest rates or changes in conviction rates for changes in prison population and things like that, which I think would go a long way to explaining the increases that we’ve observed over the last two years or two and a half years now,” Lott told The Epoch Times.

Makridis doubts that sort of key law enforcement data can be found at the level of individual counties.

Like Lott, he acknowledged the likely significance of attitudes toward law enforcement.

“So many of the comments I hear from police officers just anecdotally is that they feel marginalized and ostracized.”