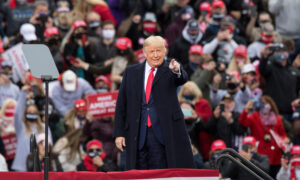 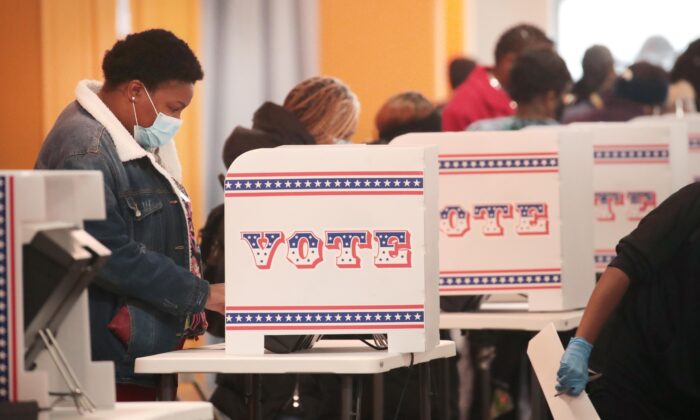 Residents vote at a polling place in the Midtown neighborhood in Milwaukee, Wis., on Oct. 20, 2020. (Scott Olson/Getty Images)
2020 Election

2020 Election to Have Highest Turnout Since 1900, Expert Predicts

Some 100 million Americans will cast their ballots early this year, and tens of millions more will vote in person on Election Day, making for the highest turnout since 1900, an early voting expert predicts.

With more than 94 million ballots already cast, some states have already exceeded their total turnout from 2016. In many others, residents are expected to largely vote on Election Day.

Overall, 160.2 million will vote this year, estimated Michael McDonald, associate professor at the University of Florida and head of the U.S. Elections Project. He arrived at the number by examining how many voters are still likely to cast their ballots in each state based on past election behavior, this year’s early voting data, as well as state rules governing how late a mail-in ballot can arrive to be counted.

In a Nov. 1 release, he predicted a turnout of 67 percent of all eligible voters. That would be the greatest participation since Republican President William McKinley crushed Democrat William Jennings Bryan in 1900. Nearly 74 percent showed up to vote that year.

“One strong signal is that turnout will be higher than in 2016 because some states have already exceeded their 2016 turnout or are close to doing so,” he said.

Texas has already surpassed its total 2016 turnout by more than 8 percent, with Hawaii having done so by almost 11 percent. Montana is at about 99 percent of its 2016 turnout, and Washington is at nearly 98 percent. North Carolina, Georgia, Florida, New Mexico, and Nevada also have crossed their 90 percent marks.

It’s likely that the blockbuster early voting numbers will be to some degree offset by a lower turnout on Election Day. Nearly two-thirds of Democrats told Gallup in September that they had already voted or planned to do so early. That’s up from 44 percent who gave that answer in 2016. Democrats tend to be more anxious about the CCP virus pandemic, and their politicians and media have promoted mail-in voting as the best option.

Among Republicans, however, the poll showed the opposite trend. Only 28 percent said they had already voted or planned to vote early, down from 42 percent in the 2016 election. Republicans tend to be less worried about the coronavirus and their messaging aligns with the trend, focusing on concerns over mail voting integrity, which suggests that Republicans will take to the polls in stronger numbers than usual.

Lately, President Donald Trump and his campaign have urged supporters to vote early, but still in person. The data indeed gives an edge to Republicans in early in-person voting, which will cut into their Election Day numbers.

Arizona, where Republicans have been eating away at Democrats’ early voting lead, hasn’t updated its numbers since Oct. 30, when Democrats led by about 43,000 ballots. The number relies on the party registration of each voter, rather than who they actually vote for.

In Florida, Democrats are ahead by fewer than 95,000 ballots. That’s a lead of just 1.1 percent, less than the 1.5 percent they had in 2016, McDonald said. Democrats still have nearly 160,000 more outstanding mail-in ballots than Republicans in the state. They can expect some portion of those will still be returned, though Florida doesn’t accept ballots received after Election Day.

In North Carolina, Republicans are behind by more than 250,000 votes. But “Trump appears to be in a better position” there than in Florida, according to McDonald, “since the Election Day vote is expected to be very Republican.”

In Pennsylvania, Democrats have returned nearly 1.6 million mail-in ballots, compared to Republicans’ return of around 550,000. Its residents, however, are used to mostly voting in person and a large portion, Republicans in particular, are expected to follow that tradition. Former Vice President Joe Biden, the Democrat nominee, has focused his last days of campaigning on the state, which carries a hefty 20 electoral votes.

Based on the early voting data and other indices, McDonald is calling for Biden to win Colorado, Oregon, Nevada, Maine, and, with caution, Arizona. Iowa and North Carolina point to Trump, he predicted. Florida was too close to call, he said, and Pennsylvania too uncertain to guess because its election rules have changed too much from 2016.

A major wild card will be the split of unaffiliated voters, who “will be participating at higher rates than 2016,” according to McDonald.

“I should add that these voters are not the same as self-identified independents in polls. They are people who don’t tend to vote in party primaries. They tend to be younger, and more often persons of color. These infrequent voters are exactly the sorts of people you’d expect to see engaged if there will be a high-turnout election. Their larger presence in the electorate could make a significant contribution to the election outcome, beyond the simple partisan differences I’m discussing here to make my election forecasts.”