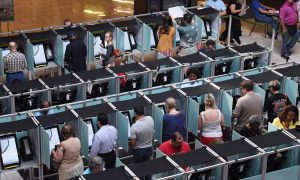 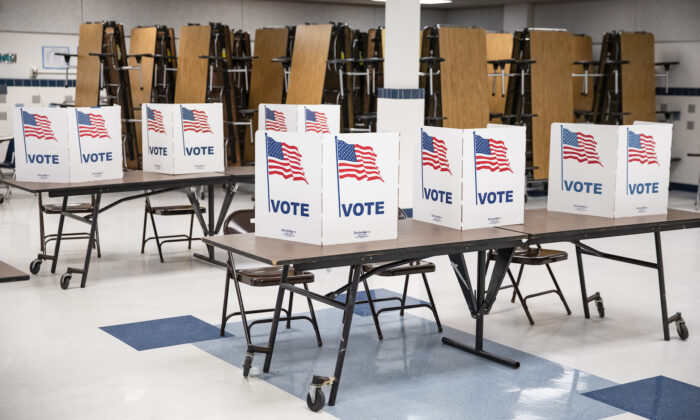 2020 Election Landscape Being Altered by the Pandemic

The pandemic has, as of April, altered the U.S. election landscape with many states delaying primary elections and forcing the Democratic National Committee (DNC) to change its convention from July to mid-August to protect public health and ensure that everyone can engage in the voting process.

The CCP virus pandemic has altered over two dozen states’ democrat presidential primary elections and is requiring state policymakers to think ahead to ensure fair and safe elections in November. In many states, laws are being introduced to guarantee that voting is efficient and effective despite social distancing measures being in place for an uncertain length of time.

Many states, to work around the social distancing requirements, have moved to mail-in ballots for their presidential primaries, and other states have postponed their primaries with polling places open for those who choose to vote in person. Delaying elections give states time to educate the public and put an alternative voting measure in place.

“Our election processes and infrastructure will continue to be tested by the coronavirus. Policymakers and election officials must ensure that every eligible American has access to the ballot box because the essence of democracy is that every eligible voter must have the opportunity to participate. Elections have endured in other times of crisis, and they will in 2020,” said Trevor Potter, President of the nonpartisan Campaign Legal Center (CLC) and a former Republican Chairman of the Federal Election Commission.

State officials are making complicated decisions to juggle public health with voting rights. States will have to put measures in place to ensure safe access to voting, both for primary and general election voting dates. Some of these measures include access to on-line and same-day voter registration, expanded early voting, expanded vote-by-mail and absentee ballot programs, and the recruitment of poll-workers from less at-risk populations.

In a 2017 Task Force on Emergency Preparedness for Elections report by the National Association of Secretaries of State assessed States’ emergency voting procedures.

The task force found 12 states had a law that specifically authorized the suspension, delay or postponement of an election in an emergency, which would be made by the governor or chief election officer or a combination of the two. In many cases, the emergency voting is implemented following a declaration of a state of emergency made by the governor.

New York State has a series of bills that will allow voters to vote via absentee ballots and by mail to address concerns of a pandemic.

In a March 28 tweet, Governor Cuomo wrote, “NEW: We will move our presidential primary to June 23rd. Public health is our number one priority, and we will carry out this vital democratic process at a safer date.”

New York City has become the epicenter of the pandemic in the U.S. New York reported that the state had tested 220,880 individuals, with 15,694 new people tested on March 31.

Like New York State, over a dozen states have made decisions to postpone or change their voting to mail-in to help mitigate the spread of the CCP virus.

Chairman J.R. Romano of Connecticut’s Republican party told the Epoch Times that Connecticut has complicated absentee ballot rules and no efficient mail-in ballot system to ensure voters can cast their vote in the upcoming elections.

“It’s a difficult process, with many steps for a voter to get an absentee ballot and as far as on-line ballot that can be downloaded—not everyone has access to printers.”

He continued, “Without a doubt, there will be a massive drop in numbers of voters because our state does not have a no-excuse ballot option.”

According to National Convention of State Legislature (NCSL), “Thirty-three states allow no-excuse absentee voting, but voters may not know they have that option”.

Like Connecticut, some other states also require voters to request absentee ballots in person or by mail, which because of stay-at-home orders, is making more states offer an on-line printable ballot option. according to NCSL, “Idaho just became the 11th state to open an online absentee ballot request website”.

As more states issue stay-at-home orders and the length of time for social-distancing is highly uncertain, Pennsylvania, New Jersey, Alaska, New York, and Massachusetts have legislation pending to have all or specific elections be by mail-in ballot.

Professor Emeritus and former chief of infectious diseases at Johns Hopkins School of Medicine, Dr. Buck Greenbough told Epoch Times that he believes the social distancing measures in place throughout the United States will need to be extended at least one additional month.

“I don’t think the end of April will see us through this pandemic, the end of May is more likely but still not certain.”

Although more states have added mail-in ballot options, in-person polling places are still on the menu but might be hard to staff and keep clean. In the past senior citizens often manned the polling venues, and there seems to be a nation-wide shortage of hand-sanitizer and disinfectants.

Senator Amy Klobuchar (D-Minn.) and Ron Wyden (D-Ore.) led a group of Democratic senators to introduce legislation on March 18 to promote mail-in and early voting to decrease the spread of the CCP virus.

The Natural Disaster and Emergency Ballot Act (NDEBA) would allow voters 20 days of early voting in all states and stipulates that all mail-in ballots received during the 21 days be valid, and ensure that all voters have the option to request absentee ballots.

These emergency plans would allow voters to vote by mail without a specific excuse and to vote early in person for a full day before an election.

The ideas are to make voting as easy as possible for all voters.

The bill would guarantee that all states automatically mail ballots to registered voters; voters can mail back those ballots for free, and voters should also be able to drop off ballots at predesignated locations. The ballots should be accepted as long as they are postmarked by Election Day and received within 10 days of the election.

Democratic party leadership stated in a recent op-ed that it will help states pay for these reforms, with the democratic leaders writing, “That’s why any state that voluntarily complies with such reforms will receive payments equal to the costs they’ve incurred.”

The Federal government has also earmarked $400 million to states responding to the pandemic’s disruption of the 2020 election cycle—including promoting mail-in voting.

The CLC’s National Task Force on Election Crises released The COVID-19 Election Guide, available here. The task force had four key recommendation to ensure the integrity of the upcoming elections:

Vanita Gupta, president, and CEO of The Leadership Conference on Civil and Human Rights and Task Force member, added,  “In 2020, further unexpected events are bound to take place, but the right to vote must be protected and preserved. Already, we are seeing the impact of COVID-19 on primary elections—and officials are obligated right now to take steps, like the ones outlined in our guide, to ensure the general election proceeds on schedule as required under federal law.”

On April 2, the DNC announced they would move the convention to August 17. The new August date for the event, still set to be held in Wisconsin, is right before the Republican National Convention, which will be held in Charlotte, North Carolina, from Aug. 24 to 27.

“In our current climate of uncertainty, we believe the smartest approach is to take additional time to monitor how this situation unfolds so we can best position our party for a safe and successful convention. During this critical time, when the scope and scale of the pandemic and its impact remain unknown, we will continue to monitor the situation and follow the advice of health care professionals and emergency responders,” said Joe Solmonese, CEO of the Democratic National Convention Committee.

Hans A. Von Spakovsky, the Manager of Election Law Reform Initiative and Senior Legal Fellow of the Heritage Foundation, told Epoch Times that primary or local elections for federal office had been postponed several times since 1860. However, there is no example of a general election being postponed or delayed during a federal election cycle.

If November’s election date had to be changed, Spakovsky said, “Only Congress has the authority to change the date of the general election through the regular legislation process, passing in both the House and Senate,” amending the constitution.