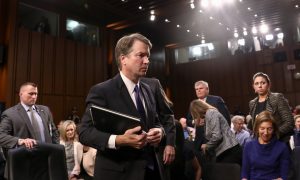 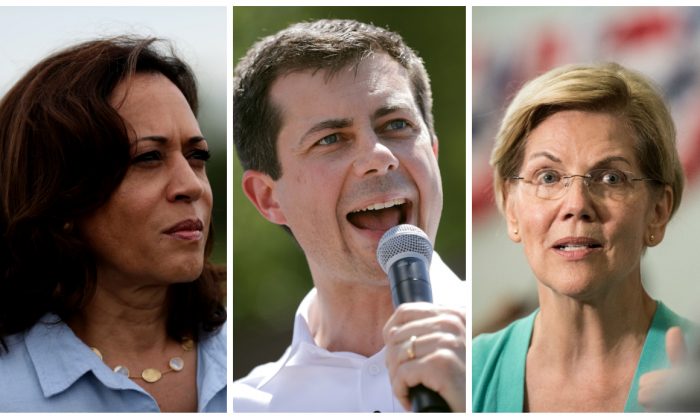 Multiple Democratic presidential contenders called for the impeachment of Supreme Court Justice Brett Kavanaugh based on a New York Times story that was later undermined by a major correction.

The New York Times claimed it was revealing a previously unreported alleged sexual assault by Kavanaugh, but in its correction admitted that friends of the woman who was allegedly the victim said she didn’t remember the alleged incident.

The correction also noted that the reporters who authored the piece were not able to talk to the woman herself.

Based on the original piece, which relied heavily on a former lawyer of former President Bill Clinton, presidential contenders said Kavanaugh should be impeached or that an investigation should be launched based on the allegations.

None of them have issued statements after the correction was issued overnight on Sept. 16.

“Last year the Kavanaugh nomination was rammed through the Senate without a thorough examination of the allegations against him,” Warren wrote in a statement. “Confirmation is not exoneration, and these newest revelations are disturbing. Like the man who appointed him, Kavanaugh should be impeached.”

Last year the Kavanaugh nomination was rammed through the Senate without a thorough examination of the allegations against him. Confirmation is not exoneration, and these newest revelations are disturbing. Like the man who appointed him, Kavanaugh should be impeached.

The others claimed that Kavanaugh lied during his testimony before the Senate Judiciary Committee without citing the supposed lie or lies. Sen. Bernie Sanders (I-Vt.), another presidential contender, said Kavanaugh “likely lied” and endorsed “any appropriate constitutional mechanism to hold [Kavanaugh] accountable.”

Former Vice President Joe Biden said that the article raised “profoundly troubling questions about the integrity of [Kavanaugh’s] confirmation process” but stopped short of calling for impeachment, as did Sen. Amy Klobuchar (D-Minn.).

“I don’t think you can look at impeachment hearings without getting the documents … and the attorney general is shielding documents,” she said during an appearance on ABC’s “This Week.”

Sen. Cory Booker (D-N.J.) suggested impeachment, writing in a statement, “This new allegation and additional corroborating evidence adds to a long list of reasons why Brett Kavanaugh should not be a Supreme Court justice.”

The FBI examined the accusations made against Kavanaugh before he was confirmed and found no substance to the allegations.

The primary accuser, Dr. Christine Blasey Ford, named four people who were in the house when she was allegedly assaulted, but none could corroborate her claim. Ford’s lawyer said earlier this year that her coming forward was motivated by fear that Kavanaugh would rule against Roe v. Wade, the Supreme Court ruling that declared abortion a Constitutional right.

An independent investigator said that Ford’s story had multiple inconsistencies.

Another accuser, Deborah Ramirez, was also unable to produce corroborating information or witnesses.

Julie Swetnick, who came forward with disgraced attorney Michael Avenatti, was referred for a criminal probe because of “obvious” contradictions in her allegation, Sen. Chuck Grassley (R-Iowa) said last year.

Four major contradictions included the fact that Swetnick and Avenatti were unable to produce evidence that the woman knew Kavanaugh, while Kavanaugh denied knowing her and 64 people who knew Kavanaugh in high school went on the record saying they didn’t recall ever meeting anyone named Julie Swetnick.

A number of Democratic lawmakers called for the FBI to investigate Swetnick’s claim during the confirmation hearings, including Harris, Sen. Dianne Feinstein (D-Calif.), and Klobuchar.

President Donald Trump, who nominated Kavanaugh, said that the justice “should start suing people for libel” after the story was published.

“The far left’s willingness to seize on completely uncorroborated and unsubstantiated allegations during last year’s confirmation process was a dark and embarrassing chapter for the Senate,” McConnell said in a statement on Sunday, adding that he thinks most Americans still believe in due process.