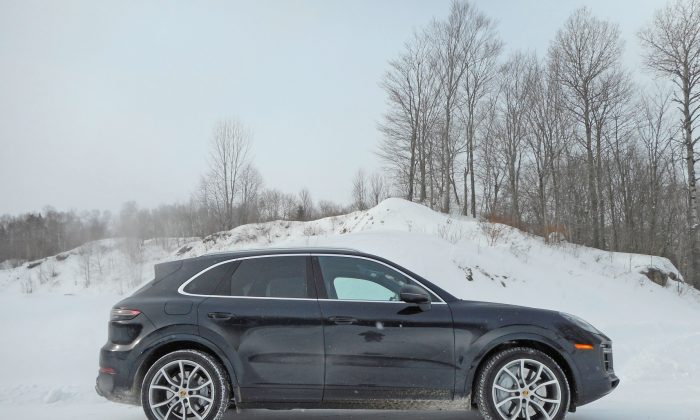 The Cayenne may be Porsche’s bread-and-butter product, representing 40 percent of the company’s total sales in Canada since the original launch 16 years ago, but that doesn’t mean it has to be boring. Entering its third generation with a smaller yet more powerful engine and a whole lot of cutting-edge technologies, the 2019 Turbo variant proves the vehicle is anything but. Read on.

Porsche enthusiasts have learned they shouldn’t expect any radical updates to the exterior, and this strategy remains true here.

“The E2 I (chassis code for second-generation Cayenne) in 2011 was marked by an extreme design change, which is atypical for Porsche. I’d say the major change for the E2 II (refresh) in 2014 was the new engines, and we lost the manual [transmission],” says Jonathan Thomson, manager of product planning at the Canadian launch event held at Mont-Tremblant in Quebec.

“In terms of design, the new E looks very familiar to the E2 II. We won’t expect to see [any more] massive changes, similar to the 911’s hereditary design,” says Thomson, adding that the SUV really came into its own during gen two.

The crossover has grown a little—71 millimetres longer and 29 millimetres wider than the outgoing model—although the overall height is 20 millimetres lower for a sportier, hunkered-down appearance.

One easy way to tell the 2019 apart from the rest is at the back. Similar to the Carrera, a thin light bar connects the tail lamps, extending above the “Porsche” script in the centre of the liftgate. The rear valence possesses raised strakes housing quad tailpipes. The roof spoiler is adaptive, with the centre section able to automatically articulate upwards.

Inside, the dashboard is almost unrecognizable compared to before. Previously known for having too many buttons and switches, the Cayenne Turbo now has the Porsche Advanced Cockpit showcasing an ultra-high-definition 12.3-inch wide touchscreen monitor responsible for manipulating climate and entertainment settings, among others, and two 7-inch HD screens flanking an analog tachometer displaying a variety of customizable information. Even the suspension and traction-management controls near the shifter are based on haptic feedback.

Activating the dynamic mini-map function on the right side is life-saving when navigating unfamiliar roads. That said, in my opinion there is such a thing as over digitization. I was playing around in the menus and at one point the electronic fuel gauge disappeared—not what one wants happening while out driving in the middle of nowhere. A lot of commands once executed with a single button push are hidden away in sub-menus. Certainly takes some getting used to.

On the performance side, the Turbo is powered by a 4.0-litre twin-turbocharged motor, replacing the former 4.8-litre bi-turbo unit, mated to an eight-speed Tiptronic S automatic transmission. The output is up to 541 horsepower (+21) and 567 lb.-ft. of torque (+14), but feels much quicker because the turbochargers are now installed inside the cylinder’s V shape. This shortens the exhaust path improving engine responsiveness.

Unfortunately, the amount of snow only made a thin coat on the ground so I didn’t get to push the crossover to the limit. However, I did make good use of the wicked new brake setup. Called Porsche Surface Coated Brakes, the massive 415-millimetre front and 365-millimetre rear rotors are treated with a tungsten carbide layer increasing efficiency and, as a side benefit, generate virtually no brake dust and feature a mirror polish finish. Sitting overtop are white 10-piston front calipers and four-piston rear calipers. The stopping power is immense, whether on dry pavement or on the icy surfaces I experienced.

Benjamin Yong is a freelance writer from Vancouver, B.C., and a member of the Automobile Journalists Association of Canada (AJAC). Follow him on Twitter @b_yong.