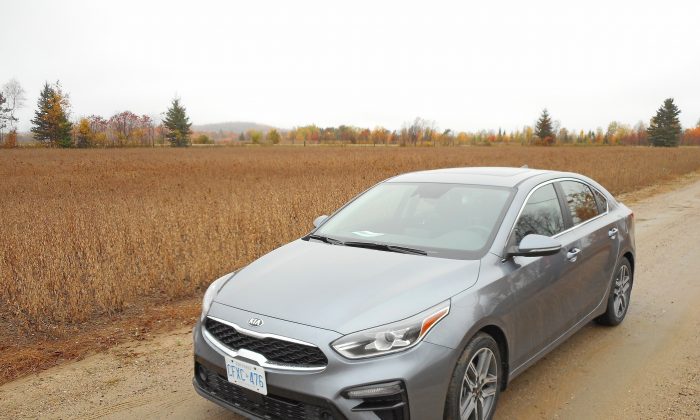 After attending a press briefing and first drive of Kia’s all-new 2019 Forte last month in Montreal, the takeaway was simple: Big things come in small packages.

The official marketing tagline is “Compact – not a Compromise,” which basically means that although the Forte is classified as a compact car, it is capable of much more than what one would expect from the segment.

Another vehicle from the brand has made big waves as of late. Yes, I’m talking about the Stinger sports sedan. But how is this relevant, you’re wondering.

“We’ve brought design from the Stinger into the Forte, and it’s most evident on the front of the vehicle,” said Michael Kopke, director of marketing at Kia Canada Inc.

Line the two vehicles up side by side, and you definitely see the resemblance. Both have long sculpted hoods, slim headlamps, big lower-air intakes, and that Peter Schreyer-influenced “tiger nose” grille. And we’re not done yet: The roof slopes steeply to the rear, resulting in a classic fastback shape. Around the back, the lighting runs straight across the trunk, sitting above an integrated bumper diffuser. Heck, even the key fob has the same shape, looking a bit like a remote detonator.

Now, I’m not going to sit here and tell you that the Forte interior is the same as a model nearly twice the price—because it’s not. However parallels do exist: the floating centre monitor and the “jet turbine” style circular side HVAC air vents. Furthermore, as product planner manager Ryan Yu sums it up, the two do share a love for technology.

“It’s a compact, not a compromise, and here’s the reason. There is a full suite of safety features including forward collision avoidance assist, an 8-inch standard display, the base EX trim gets full LED headlights and LED daytime running lights, wireless charging, etc.,” said Yu.

In addition, Android Auto and Apple CarPlay are supported, so simply plugging in a smartphone gives in-dash access to the device’s core functions. I feel I should point out that those on a budget will be pleased to learn even the entry-level LX grade comes with a heated leather steering wheel, heated front seats, and air conditioning.

Powering the new Forte is the second-generation 2.0-litre “Nu” Atkinson-cycle engine. Utilizing some nifty fuel-saving engineering normally seen in hybrid and EVs, Kia has managed to squeeze 147 horsepower and 132 lb.-ft. of torque out of the four-cylinder, while achieving approximately 6.9 L/100 km fuel economy when mated to the continuously variable transmission (a six-speed manual is also available on the LX).

We were given a chance to drive the CVT only, or as the company calls it, a chain-belt-driven Intelligent Variable Transmission that mimics a conventional automatic by providing a step-shift feel under heavy acceleration. This setup does perform and sound better than select systems I’ve tested in the past, possessing the dreaded rubber-band effect.

The car is peppy, handles well on the road, and has a tight turning radius—somewhat of a prerequisite for me as a city dweller. Another urban must is plenty of storage space, and the Forte hides 434 litres of it beneath the trunk lid. To achieve the extra room, the vehicle has been stretched out 80 millimetres and widened 20 millimetres.