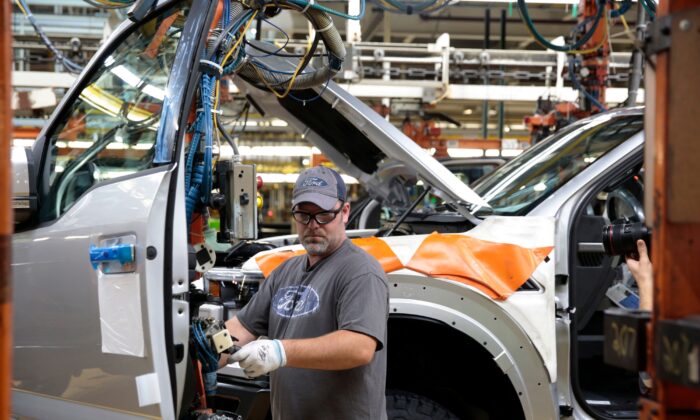 2019 in Review: US Economy Strong, Entering the Longest Expansion in History

The U.S. economy proved remarkably resilient in 2019, defying recession fears that dominated the headlines throughout the year. The economy has entered the longest expansion in American history, surpassing the economic boom of the 1990s.

United States consumers, buoyed by the strong labor market, have continued to drive economic growth during the past year against a backdrop of weak business sentiment.

Increased hiring and rising wages have powered consumer spending, which accounts for more than two-thirds of the U.S. economy. The stock market also rose steadily throughout the year, boosting household income and allowing people to spend more.

“The consumer is really driving growth” and hasn’t been impacted by weakness in manufacturing, export, and business investment, Federal Reserve Chairman Jerome Powell said during a press conference on Oct. 30.

The trade dispute with China hasn’t affected consumer spending, either. Despite tariffs on Chinese imports, changes in retail prices kept pace with broader inflation, mainly due to China’s devaluation of its currency, according to economists.

The United States economy grew at an annual rate of 2.1 percent in the third quarter; growth for 2019 is predicted to be 2.3 percent, weaker than last year’s 3 percent.

However, the slowdown is worldwide, and the U.S. economy held up relatively well compared to other advanced economies, according to Gary Cohn and Kevin Hassett, former White House economic advisers.

The United States “is the only Group of Seven countries that will post growth above 2 percent this year,” they wrote in a Wall Street Journal op-ed, adding that tax reform boosted productivity and wages.

The United States economy expanded for a record 126th straight month in December, the longest expansion on record. And the country finished an entire decade without entering a recession, for the first time ever, according to a CNBC report.

Meanwhile, the global economy recorded its weakest growth in the past 10 years, according to the International Monetary Fund. Rising trade tensions, poor business climate, and activity, as well as country-specific weaknesses in emerging markets, have been a significant drag on global growth in 2019.

Trump has called the United States economy, “the envy of the world.”

It’s also been a good year for U.S. stocks. The market valuation of the United States stock market has recently climbed to a record 1.5 times gross domestic product.

Global slowdown and trade risks, however, weighed on business confidence in the United States. The trade war with China, in particular, led United States firms to slow their investment decisions in 2019. Economists, however, started to see a silver lining.

“However, there are signs that global manufacturing weakness is bottoming,” they said, adding that a pickup in United States domestic activity could also boost equipment investment and manufacturing in the first half of 2020.

Fed officials, however, signaled that the current cycle of cutting rates is over. They stated that monetary policy is currently “in a good place” and that a “material reassessment” of the outlook would be necessary to ease policy further.

“This suggests a higher bar” for future rate reductions, Citigroup economists suggested but added that interest rate cuts would be more likely than rate increases in 2020.

The strong United States economy has continued to attract investment in 2019 from all over the world because of the perceived safety of United States markets. As a result, the U.S. dollar has risen to a record high relative to emerging market currencies. Geopolitical tensions also boosted demand for the dollar.

The dollar’s high value relative to other currencies will likely continue in 2020, according to the Institute of International Finance.

“The major driver of the dollar is excess demand for dollar-denominated stocks and bonds, and other assets,” Robert Scott, senior economist at the Economic Policy Institute, told The Epoch Times.

“We’ve got a problem with too much capital coming into the United States,” he said, adding that the trade deficit is widening as the strong dollar keeps making imports cheaper and United States exports more expensive.

In December, President Donald Trump got a major win on trade after the United States–Mexico–Canada trade agreement passed the House. Also, the United States and China announced that they would sign the “phase one” trade deal in January.

These two deals will allow Trump to go into 2020 with a very strong economy, according to Stephen Moore, an economist, and former Trump campaign adviser.

The state of the economy is the overriding factor in how people vote, Moore told The Epoch Times.

“I believe that Americans vote with their pocketbooks. ‘It’s the economy, stupid,’” he said, recalling the famous motto coined by Bill Clinton’s campaign strategist that summed up Clinton’s election in 1992.

While the economy is in a stable position, the fiscal future deserves more attention in 2020, according to Jim Glassman, head economist for JPMorgan Chase’s commercial banking operation.

“While recessionary and other economic fears loomed large in 2019, the expansion proved quite resilient,” Glassman wrote in a report.

“That said, fiscal reforms may be needed in 2020 to keep the United States on a sustainable path.”