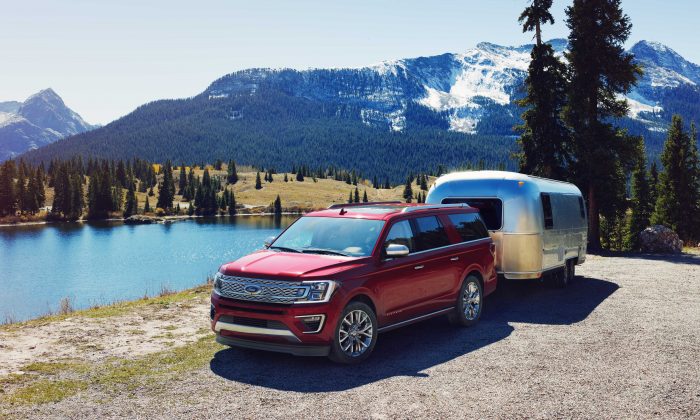 Redesigned for the modern age
By Benjamin Yong
Print

The Ford Expedition had big shoes to fill when it was first introduced in the late 1990s as the successor to the Ford Bronco. After three successful generations of helping families get where they need to go, no matter the terrain, the full-size SUV enters the modern age in 2018, completely redesigned.

The automaker calls it “the smartest, most capable and most adaptable Expedition ever.”

What exactly does Ford mean? We were invited to the rolling hills of the scenic Muskoka region in Ontario during the summer to get a hands-on look at the 2018 Ford Expedition. Although the vehicle wasn’t ready for testing at the time, the Expedition will be released sometime in the fall.

In the early days of the Ford Expedition model, the big technological achievement was the optional ControlTrac four-wheel-drive system with an electronically managed center differential. Now, the Expedition has much more to offer than simply 4WD.

“When Expedition was introduced 20 years ago, it set the standard for active families who simply needed a big and strong SUV to take them places,” said Joe Hinrichs, Ford president of The Americas, in a news release.

There are more than 40 on-board digital driving aids and features consumers may choose from, aimed at making it easier and safer to operate the vehicle now more than ever.

Some of these features are already seen across the lineup. They include enhanced active park assist, which helps drivers pull in and out of parallel and perpendicular spots; a 360-degree camera, to let the driver see obstacles in every direction; and adaptive cruise control with stop-and-go, essentially making highway driving semi-autonomous.

Ford Expedition owners of old would never have imagined that one day their beloved SUV would be an internet hub, with a built-in WiFi hotspot that can support up to 10 mobile devices; and be capable of being remotely controlled, via the FordPass smartphone app that allows a user to lock and unlock the doors and even start the engine.

In addition, the Expedition can accommodate cellphone charging sans cables. This is a first for Ford. Compatible smartphones can power up wirelessly by being placed on top of a charging pad located in the front center console.

So that covers the smart technology portion. What about “capable”?

Powering the 2018 Ford Expedition vehicle is the same 3.5-litre turbocharged EcoBoost engine, full of low-end grunt, which can also be found in the 2017 Ford F-150 pickup truck.

When towing something big and heavy, reversing is made simple with Pro Trailer Backup Assist. Simply turning a knob on the dash causes the payload to turn in the same direction.

Finally, we arrive at the “adaptable” part of the equation.

One of the best parts of being in the full-size segment is the ability to carry up to eight passengers and all their cargo.

In some other seven- or eight-seaters, access to the third row can be tight or nearly impossible. In the 2018 Ford Expedition, the second row can both tip and slide so people can reach the back without running into excessive difficulty or having to contort body parts. And the two rear rows fold flat with a single button push when large cargo needs to be carried inside.

Still not enough room? An extended-length MAX edition will be available in Limited and Platinum series trim levels.

The 2018 Ford Expedition is built in North America at the truck plant in Louisville, Kentucky.