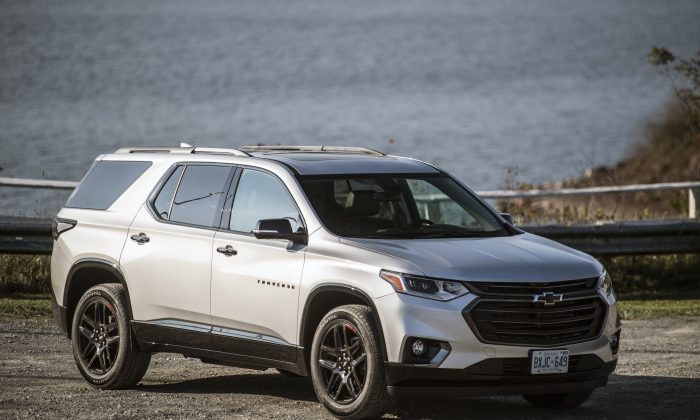 Following a successful eight-year run, the Chevrolet Traverse is completely redesigned for the 2018 model. The stylish SUV does away with the former rounded body shape and adopts an upscale, truck-like appearance, better tech, and a new powertrain.

“The key points are, overall, the vehicle has [roughly] the same dimensions as the previous generation. However, there are way more features, a way better interior, and more passenger volume compared to before,” says Nicolas Longpre, brand manager for Chevrolet Crossovers in Canada, at a product presentation held in Atlantic Canada.

Although the Traverse is categorized as a mid-size SUV, it’s now on the larger side, gaining a slight 15.2 millimetres in length and 2.5 millimetres in width. A 50.8-millimetre longer wheelbase makes the vehicle appear bigger than its predecessor, even though, as Longpre mentions, the size is about the same. The height has actually dropped by 7.6 millimetres.

Nothing says premium like chrome, and there’s plenty strategically placed around the larger grille and on the door handles, fog lamp surrounds, and lower door trim. The headlamps are slimmer and shapelier and can be ordered with high-powered D-Optic LED lighting. Meanwhile, Chevy has recently added a sporty RS grade favouring a blacked-out exterior trim treatment in lieu of the shiny chrome bits and including uprated 20-inch wheels.

No doubt the second-generation Traverse looks great on the outside, but the interior is where the SUV really shines. The latest MyLink infotainment system supports Apple CarPlay and Android Auto smartphone interfaces, and USB charging ports have been installed around the cabin. As found in all modern GM products, the subscription-based OnStar 4G LTE Wi-Fi hotspot is reliable and an excellent way to stay connected

Another benefit of the aforementioned longer wheelbase is extra legroom: Passengers sitting in the optional third-row seating enjoy a class-leading 856 millimetres of space. The second row boasts an enhanced version of Smart Slide, where the curbside seat can tilt up and slide away to give easy access to the back, even when a forward-facing child seat is mounted.

During the media drive, I had a chance to evaluate the standard 3.6-litre V6 engine found in all Traverses—except for the RS, which packs a 255-horsepower 2.0-litre four-cylinder. Rated at 305 horsepower, an improvement of almost 10 percent, and 260 lb.-ft. of torque, the SUV chugs along at a good pace and, if I were so inclined, has the capacity to tow a trailer weighing up to 5,000 pounds. Both engine types are mated to a nine-speed automatic transmission. Front-wheel drive is the norm for the base LS, LT, and RS trims, while all-wheel drive can be bundled on all models except the turbo.

A neat addition for the AWD-equipped vehicles is traction mode select, which allows drivers to choose a mode best suited for the type of road conditions or activate a function to disconnect the rear axle so that fuel economy may be maximized in low-load cruising scenarios. As I played with this setting, the ride seemed to get a bit quieter.

All new to the lineup is the first-ever Chevrolet Traverse Redline Edition. Similar to the RS, the appearance and comfort package features smoked tail lamps and other darkened accessory pieces sporting a splash of red, a two-panel power sunroof, and more.