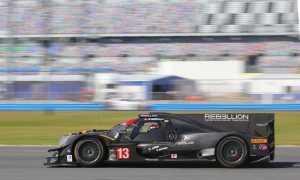 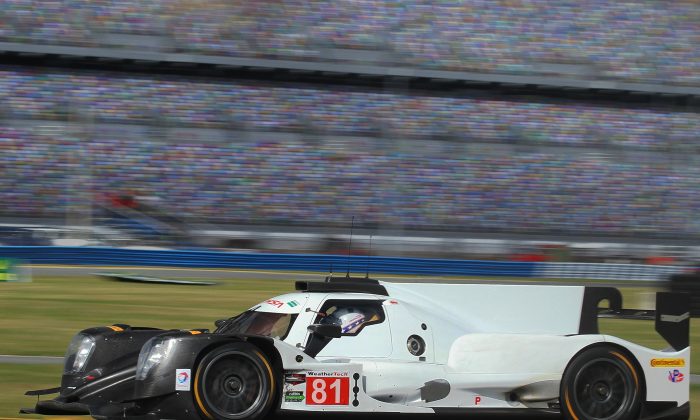 Ben Hanley in the #81 Dragonspeed Oreca-Gibson was quickest in the sixth session at the IMSA WeatherTech Sportscar Championship Roar Before the Rolex 24 at Daytona, Jan. 8. 2017. (Chris Jasurek/Epoch Times)
Motorsports

2017 IMSA WeatherTech Roar Before the Rolex 24 Concludes With Cold, Clouds, Fire, and Speed

The three-day event started Friday, a gorgeous Florida winter day, warm and sunny and perfect for watching racing—and for teams to prepare their cars for the upcoming Rolex 24 at Daytona, just a few weeks away.

Saturday was a different day entirely, with rain giving way to what is, for Florida, severe cold, made worse by the wind. Half the teams opted not to run the morning session, preferring to preserve their cars from possibly damaging off-track excursion, and instead focused on refining their dry-weather set-ups.

The afternoon session duplicated what might be night-tome conditions at the Rolex—cold track and tires led to some interesting behavior under braking.

Sunday dawned cloudy and cold—just above freezing, in fact—with neither rain nor warmth predicted.

The weather stayed as expected. What wasn’t expected was that Dragonspeed’s Ben Hanley would dethrone Rebellion’s Neel Jani as the fastest man on the track.

Stephane Sarrazin managed to keep the Rebellion third with a lap of 1:38.568, two-tenths slower than the Mazda.

Toyota LMP1 driver Michael Conway was fifth overall and quickest of the DPis in the #31 Whelen Engineering Cadillac DPi V.R. with a lap of 1:39.209 at 129.1 mph, 0.866 seconds off the pace of the leader. Ricky Taylor was eight, second fastest of the DPis, in the Wayne Taylor Racing Cadillac, 1.2 seconds back.

Ford’s four-car juggernaut continued its success in the GT Le Mans class, but the sweeps it managed Saturday were no more. Ford Ganassi Racing managed only two car in the top five (though all four made the top eight,) With BWM Team RLL and Risi Competitizione taking third and fourth positions.

A pair of IndyCar stars, Ryan Briscoe in the #67 and Tony Kanaan in the #69, set the two fastest laps in Sunday morning’s session, followed by Jonathan Edwards in the #24 BMW M6 GTLM and Toni Vilander in the #62 Ferrari 488 GTE.

As always, the class was highly competitive, with less than half a second covering the first nine finishers.

The session was stopped halfway through when Marcel Fässler’s #4 Corvette Racing C7.R burst into flame as it entered the banking. Fässler was not hurt but the front half of the car was fairly toasted.

The fire was apparently started by a faulty fuel line. Corvette Racing decided not to participate in the final Roar session until the precise cause and cure were located.

“Until the root cause of the issue with the No. 4 Corvette C7.R can be identified, the No. 3 Corvette C7.R will not return to the track this weekend,” said Jim Campbell, Chevrolet U.S Vice President, Performance Vehicles and Motorsports, according to Sportscar365.com.