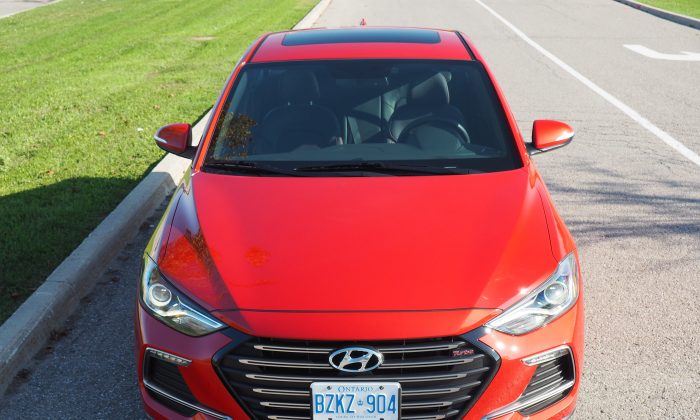 Adjectives describing the Hyundai Elantra often include safe and successful–the latest version was awarded a Top Safety Pick+ from the Insurance Institute for Highway Safety, and has sold over 40,000 units so far this year, representing over 25 percent of the Korean manufacturer’s sales.

But sporty? That’s something it hasn’t deservedly been called until now.

A brand new model, the 2017 Hyundai Elantra Sport, is being released later this fall, and is billed as the most powerful and dynamic version of the compact car ever made.

The Sport would not be possible without the underlying sixth generation chassis, built upon a “superstructure” comprised of 21 percent more high-strength steel than before, explained Ken Maisonville, national manager of product strategy.

The most powerful and dynamic version of the compact car ever made.

He spoke at start of the Hyundai Fun Day media event in Ontario where journalists were given a taste of the sprightly sedan after “finding” the vehicle from solving a series of geocaching puzzles set up around the Greater Toronto Area.

“We took our own in-house steel plant—we’re the only manufacturer in the world with our own steel plant—and started from the ground up with an all-new superstructure and that’s the basis for everything about Elantra,” said Maisonville.

To throw some additional numbers out there, torsional rigidity has improved by 30 percent, and bending rigidity by 25 percent. So what does that mean in plain English?

“Improved ride and handling, cabin quietness, and safety. That’s what we’re going for and that’s going to turn around perception of quality,” he said.

A number of exterior changes differentiate the Sport from regular variants. These include a unique front fascia comprised of headlamp housings containing red inserts; a wider black chrome grille, horizontally, as opposed to vertically, arranged signature LED daytime running lights; and a subtle splitter resting beneath the front bumper.

Around the rest of the vehicle, there are 18-inch multi-spoke wheels wrapped in Hankook Ventus S1 Noble2 tires, side skirt extensions, revised LED taillight lenses, and dual polished muffler tips peeking out from behind a built-in rear bumper diffuser.

The dual-exit tailpipes don’t just look pretty—they’re connected to a specialized exhaust system tuned for a very specific performance-oriented sound. Maisonville says engineers paid extra attention to ensure it’s only loud on the outside without the dreaded in-cabin drone at mid to high rpm levels.

I can vouch for this, as driving with the windows up there is hardly any noticeable extra noise. Standing outside at a parking lot slalom watching the cars do laps, however, the sound generated was glorious, and I could hardly believe it was coming out of an Elantra.

Backing up the aggressive rumble is a 1.6 L turbocharged 4-cylinder engine producing a healthy 201 hp and 195 lb-ft of torque at an accessible 1,500 rpm. Choices of transmission are between a 6-speed manual and a 7-speed dual-clutch transmission.

I only had the opportunity to try out the automatic in the aforementioned autocross setting and it was very good in terms of shift response time, at least between the first, second, and third gears I was mostly using.

Stiffer spring and shock absorbers have been outfitted and it shows in the handling. Making my way around the course the vehicle danced around the cones easily and I felt the only thing that might make the experience better would be stickier rubber, although the Hankooks did well considering they’re designed for all season use.

The 2017 Hyundai Elantra Sport will start at MSRP $24,999 when it is launched later this fall.

Benjamin Yong is a freelance writer from Vancouver, B.C. and a member of the Automobile Journalists Association of Canada (AJAC). Follow him on Twitter at twitter.com/b_yong