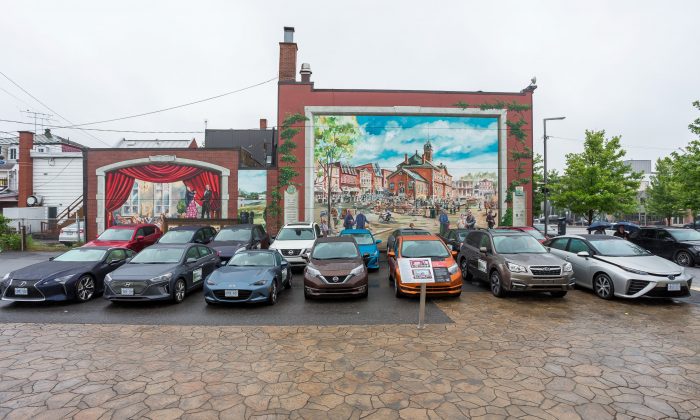 To be 100 percent clear: the purpose of the EcoRun is to help inform consumers of these alternative options, as well as providing accurate road testing fuel economy numbers. This driving-oriented event is not a race—neither is it a competition. This is a public demonstration to provide potential buyers with facts and information on a broad range of energy-efficient vehicles and technology currently available. There’s absolutely no limit to the size of vehicle a recognized automotive manufacture may enter.

For 2017, this was the sixth annual undertaking of this popular consumer-oriented driving event. For just over two days, between Ottawa and Quebec City there were vehicles of all shapes and sizes on those country roads, highways and urban blacktop—from full-size sports utility vehicles to a drop-top two-seater sports car, as they range from subcompacts to pickup trucks. Each and every one of the 19 vehicles are driven on real-world road conditions in order to fully test for fuel efficiency and ultimately, the reduction of carbon dioxide emissions.

There was but one stipulation: no hypermiling meaning that no driver may deliberately drive at sub-limit speeds (traffic and road conditions notwithstanding). By employing basic fuel-saving strategies, almost any vehicle may reward the owner with sometimes better-than-promised fuel efficiency ratings as stipulated by NRCan (Natural Resources Canada). It may be argued by some that the official NRCan numbers for each vehicle is difficult, some might say impossible, to achieve. Tell that to a disparate group of super-achievers, each eager to don the coveted green jersey awarded to the driver whose aggregate scoring while driving eight different vehicles was best.

A Disparate Group of Vehicles

For this year’s event, the first full day of driving started in the outskirts of Ottawa where I was to drive my first of eight unique automobiles out of 19 signed on by manufacturers. I was to drive to Hawkesbury by way of Parliament Hill in Kia’s new hybrid crossover (CUV) the Niro. NRCan rates this vehicle’s fuel consumption at a combined city/highway rating of 5.4 L/100 km. Over the course of almost 130 kilometres, I averaged 5.7 L/100 km. I attribute my higher number to losing my way in the underground parking in the Rideau Parking Centre! Between all eight drivers, the vehicle provided 4.8 L/100 km—better than the NRCan rating.

From Hawkesbury to Mont-Tremblant and following Google Maps, the surprisingly agile Chevrolet Cruze diesel took to unpaved roads like a goat on a mountainside, often performed like a rally car, displaying heretofore unknown dynamics and achieved 5.0 L/100kms over 100 or so kilometres. NRCan rates this Cruze at 6.4 L/100km and the touring writers achieved an average of 5.1.

Next up was the powerhouse Mercedes-Benz GLE 550e, a large hybrid SUV. My drive was around 50 kilometres and I felt that this vehicle was only just getting into its stride when the leg finished. My numbers? 9.4. NRCan rates this luxury SUV at 11.1 while the eight drivers managed an average of 9.1 L/100 km.

From St.-Adele in Quebec I drove Ford’s C-Max Energi into downtown Montreal. For those unaware, Montreal drivers endure two seasons: winter and construction. This day, roadwork and work crews were in abundance as rush hour and rain enveloped the cosmopolitan city. NRCan rates this Ford at 5.1—the same average result for AJAC drivers. Somehow I managed 4.7 L/100 km!

Fueled by Gasoline, Electricity, and Even Hydrogen

Day two saw us drive the first leg from Montreal to Joliette: this was my first time ever behind the wheel of Volkswagen’s e-Golf—VWs mass-market foray into the world of electric vehicles (EVs). Guess what? It drove like a Golf, except much quieter. And that is not intended to be detrimental. The only difference would really be range from a full charge (under 300 kilometres) compared to a full fuel tank. With an NRCan rating of 2.0 L/100 km, all eight averaged 1.7—the exact same number as yours truly.

This day was going to be a challenge. From straight EVs to plug-ins to fuel cell and beyond, next up was the Ford Fusion Energi—a full-size sedan. I’ll blame my 4.9 result on getting a little lost driving to Trois-Rivières while NRCan declares this vehicle at a combined rating of 4.8 and the eight drivers averaged 4.7 L/100 km.

My penultimate vehicle is one to watch. Its emissions? Water! The Toyota Mirai, not as yet commercially available in Canada, is an innovative hydrogen operated FCEV, a fuel cell powered electric vehicle with a range of about 500 kilometres. No need for any range anxiety here. The average was an astounding 1.1 L/100 km.  I managed to come in at the NRCan figure of 0.9 L/100km!

After sampling sinful hand-crafted chocolate delights at Julie Vachon Chocolat in Deschambault, our weary group changed vehicles for the final time. My assigned car? The simply gorgeous Lexus LC 500h. Why can’t all hybrids have sleek lines with a look that speaks to and allows, spirited performance—yet is not too hard on the pocketbook? OK, so the green jersey was never coming my way and I must confess there was a moment or two when I did “drive” this hybrid hard and was not in the least disappointed. My number was 7.5. NRCan’s was 8.0 and the group’s median was a more than respectable 7.0 L/100km.

At the end of the day, regardless of the vehicle being driven, there are really only two factors which help you achieve—or better—NRCan’s fuel efficiency ratings—acceleration and drag (resistance based upon the aerodynamic lines of an auto).

In no specific order, the following tips can turn even the most uneven of drivers into a fuel miser—all it takes is thought and practice.

Five Tips to Save You Money

At the end of the day, driving well and saving money—it’s just like life: avoid excesses and drive in a moderate, conservative manner and soon you will notice better fuel economy and ultimately less money going toward fuel costs and government taxes.

David Taylor is an independent automotive lifestyle writer, producer, and editor based in Barrie, Ontario who is fascinated by innovation and technology which enhance the overall driving experience. He’s also a member of the Automobile Journalists Association of Canada (AJAC) and a long-term Director of that organization’s Canadian Car of the Year. Follow him on Twitter @Omemeeozzie or on Instagram @hugoscaroftheweek.